Amazing Marley gets help from the AHF/SCVMA Angel Fund

In September, 2012, Rachel Contolella noticed that her two-year-old cat, Marley, was not behaving as he usually did. “He is like a dog. He plays fetch and runs all over the apartment,” she said in an interview. “Every time I went to pet him or feed him, he was very uninterested. Then I noticed him going – more like trying to go – to the litter box every 20 minutes. Then he didn’t seem able to move much so I rushed him to the vet.” 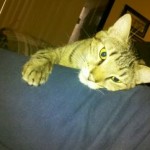 Rachel took Marley to a hospital near her Laguna Niguel home but was turned away because she did not have money to pay the bill.  She took the cat home that evening and had a sleepless night.  And the next morning she took him to the Family Pet Clinic in Anaheim Hills. Dr. Wan Goo Lee was able to ease Marley’s bladder blockage and Rachel took him home.  But the next day, the problems recurred and Rachel rushed him back to the hospital.  This time she was told that her cat needed surgery – and that he needed it immediately.

Rachel, who has a part-time job and does some modeling, has an autistic 8-year-old son.  “Money was really, really tight,” she said, “and the rent was close to being due.”  She had spent all her available cash the previous day and she told the hospital that she couldn’t afford to pay for the surgery.

The clinic’s staff did the paper work so Rachel could ask Angel Fund for help. The hospital and Angel Fund each contributed $500 to her bill and the surgery was performed. She also received financial help from IMOM.org, a volunteer website dedicated to helping sick and abused pets.

Today, Marley “is doing amazing” and he is “completely if not more like a little kitten again, chasing his tail and playing fetch. Marley brings so much joy to me and my family,” Rachel said. “If it wasn’t for Angel Fund and the hospital, he wouldn’t be here today.”

Blastomycosis kills quickly, so owners should be aware 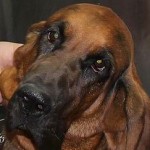 Blastomycosis, a fungal infection that primarily afflicts dogs in certain regions of the U.S., can kill a dog due to a severe lung infection. Even with proper treatment, the infection can be extremely difficult to clear, according to veterinarian Alicia Griffin. The initial symptoms are similar to other ailments, so owners must be sure to give veterinarians a thorough history for their dog, including any hunting or swimming activities because the fungus lives in moist soil and near water. Dayton Daily News (Ohio) (11/7)

Wade Rice’s dog, Chase, loved nothing more than spending time in the water. But that passion may have also cost the dog his life.

“There were no red flags at the beginning, and all of a sudden when the red flags appeared, it was too late,” said Rice, of Springfield. “Something that he loved so much eventually killed him.”

The 2-year-old golden retriever contracted a fungal infection known as blastomycosis. The dog likely inhaled spores during his time at a waterhole at Buck Creek State Park. Within two weeks of diagnosing the disorder, Rice said Chase was dead.

“I watched him take his last breath,” Rice said. “By no means did we think a healthy golden retriever, that something like this would strike him so quickly.”

The fungus grows in moist soil or vegetation, and mostly in shaded areas. Most prevalent in the summer and fall, the fungal infection can cause skin irritations, eye irritations and blindness. Once it enters the lungs, the spores multiply into large pods that can overwhelm the lungs and stop breathing, said Dr. Alicia Griffin, a veterinarian at Northside Veterinary Clinic in Springfield.

“It’s one of those region-specific diseases,” Griffin said. “It’s such a severe disease and can progress so quickly that when an owner does experience this, it is very, very difficult to treat.”

Antibiotics combat the infection, and it can take several months to treat. However, the symptoms— fatigue, rash, disinterest in food— are so common with other ailments that often owners don’t realize their pet has it. Without treatment, it is fatal. Griffin said it’s important for owners to give their vets a full history during a check-up, including time spent by the water, for an accurate diagnosis.

It’s a rare disorder— Northside has treated three known cases and three suspected cases this year. Hunting dogs and those that spend a lot of time by the water are most susceptible. Avoiding areas where fungus is common can help lessen the likelihood of contracting it, Griffin said, but owners shouldn’t be afraid of letting their dogs near the water.

Rice, who runs the “Sit, Stay and Play Dog Park” in Huber Heights with his wife, said he’d never heard of the infection before, and hopes other owners will keep a watchful eye.

“If I can help just anyone see the signs … it’s worth it,” he said.

The Jacobo family’s pet – Shadow – a Shar Pei mix, developed a large mass on her left front paw.  The family  was distraught thinking that they might have to euthanize their beloved pet because they didn’t have the money for the surgery.

Dr. Khalf applied to the Angel Fund for a grant.  The grant, combined with the hospital discounting their fees and the family paying about 10% enabled Shadow to get the surgery.

The family was thrilled and we can report that Shadow is doing fine.