January 17, 2015 by The Animal Health Foundation 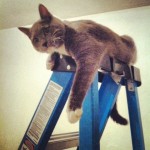 On May 5, 2012 – Cinco de Mayo, Jessie Carrillo recalled – her cat gave birth to a litter of kittens. The next day, the mother died and Jessie raised the kittens. One of them was special.

“Cosmo was my favorite cat in the whole world. He was my best friend,” Jessie said. But Cosmo, who was gray and white, found something to eat that he shouldn’t have one day when he was outside not long after his first birthday. It was a cork and it lodged in his intestines, obstructing the duodenum.

“He was acting really bizarre. After a day and a half, I realized that he wasn’t going to get better and I took him in [to the Cat Care Clinic in Orange]. They did an x-ray and they saw the blockage.”

The doctor told Jessie that Cosmo was very sick but that surgery might save him – although he might not survive it. The operation would cost $2,000 – an amount far beyond her means. Jessie wanted to do whatever she could to save her cat. The doctor suggested that Angel Fund could help. So Jessie submitted an application for assistance. She was grateful for the $250 contributed by both Angel Fund and the Cat Care Clinic.

“It was a blessing that [Angel Fund] was there because I couldn’t afford the surgery,” she said. She was working as a receptionist at the time “but my job was not affording me $2,000 for surgery.”

After the surgery, she took Cosmo home but he soon died. “He was OK for a couple of hours but then he died in my arms. I was lucky to share that last moment with him but it was really rough. He could have been euthanized but they gave me hope that he might make it. I think the surgery was just too much for his body.”

Jessie is grateful to Angel Fund and to the doctors and staff at the Cat Care Clinic. “They were really understanding and sympathetic. They were kind and they did their best.”

Today, Jessie misses Cosmo very much. Losing him, she said, was “just part of life.” But she has his sister, a beautiful black cat named Boo, now 2½.