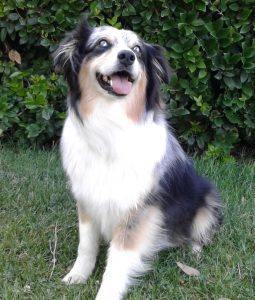 Star is a rescue dog and came to me when she was 4 years old. She does reading programs and various types of visits and also runs agility  because it is fun! Most of all Star loves people and wants everyone to feel special and make thier day! One of Star’s unique features is her blue and brown colored eyes! Star loves belly rubs and her favorite thing to do is be patted by you! 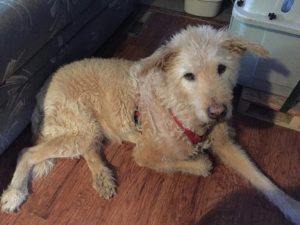 In January, 2015, Walter – a beautiful Airdale mix – got a bloated stomach and collapsed outside his owners’ apartment in Acton.  He was rushed to an emergency hospital.

“They said if we hadn’t gotten there within the next few minutes, he wouldn’t be with us any more,” Shneor Nodelman said. “If we had come 10 minutes later, they couldn’t have saved him. We got lucky on that one.”

Walter had Gastric Dilation-Volvulus.  Surgery was performed to correct the condition and Walter later went home with Shneor and his wife, Nancy.  “He surprised the doctors and recovered very fast,” Shneor said.  But a week later, Walter was back in the hospital.

“I don’t know what happened,” Shneor said. “After we took him home, he started to have pain and he was licking the incision.” He had developed an infection and new surgery was needed.  Dr. Katherine Schmidt at AV Veterinary Center in Lancaster performed the operation. “They had to clean him up and then stitch him up again,” Shneor said.

But the Nodelmans did not have the money to pay the new bills. Shneor is an electrician, who works part time, and Nancy works in real estate but does not make much money. The Nodelmans came to the United States nearly 15 years ago, emigrating from Israel. Shneor has a sister who lives in Los Angeles and has been in this country since 1994. He and Nancy would have come sooner, he said, but he had to fulfill his military obligation before the Israeli government would permit him to leave. “It’s a lot nicer here than it is in Israel now,” he said.

The hospital recommended Angel Fund. “They were really nice,” Shneor recalled, “very helpful and understanding. We also got some money to help from other sources.” Angel Fund contributed $442, as did the hospital.

The Nodelmans are grateful to Angel Fund, the hospital and other donors for the funds that helped make Walter whole again. “He is fine now,” Shneor said. “He gained back the weight he lost and he is happy, wagging his tail all the time. He’s a good and very happy dog.”