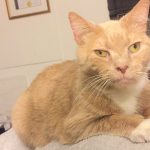 Some five years ago, Linda Lockwood found a stray cat outside her home in Vancouver, British Columbia.  “She was nobody’s cat.  I contacted shelters and looked around the neighborhood.  Nobody claimed her.  The shelter asked if I could keep her.  I had another cat but I thought I could take care of two.  So I said, OK, fine.”

Linda named her new charge Mango. She soon discovered that the new family member had some chronic health problems, particularly constipation.  “She had to get enemas once or twice a month,” she said.

Linda came to Southern California to go to school in June, 2014, with Mango in tow on the airplane.  (Her other cat had died.)  She enrolled at Pierce College in Winnetka, intending to become a veterinary technician because of her love of animals. But she ran into some trouble with a chemistry course and decided to change her major to computer science.  She did well – all A’s and one B –but decided to enroll at California Institute of the Arts to pursue her first love, music.  She will complete course work this spring on a master of fine arts degree.  Earlier, she had earned a bachelor’s degree of music in jazz studies from Vancouver Island University in British Columbia.

In November of 2015, Mango’s chronic constipation became a very real problem.  “She would poop everywhere – on my bed, on the floor,” Linda said.  “Sometimes, she’d try to poop and she couldn’t, so she’d cry. She was losing weight. She was extremely bloated because her colon was impacted.”  Linda had little money to spend but she took Mango to Happy Pets Veterinary Center in Valencia.

“They took x-rays and they told me how severe the problem was.  I just didn’t know what I was going to do,” Linda said. “Eventually, Dr. [Jane] Kelly told me, Mango was going to require surgery to remove almost the entire colon. She said she would have to refer me to a surgery specialist and that could cost more than $5,000 – and I just didn’t have that kind of money. But Dr. Kelly said that Mango’s life is at risk.  If you are unable to afford it, she’ll have to be put down.”

Dr. Kelly put Mango on intravenous fluids, multiple enemas, laxatives and pain medication for three days to stabilize her condition and suggested that Linda apply to Angel Fund for help. She did and received a grant of $275, a sum matched by Happy Pets.

But Mango still needed surgery.  “I found myself looking on the ground for coins, when I walked on campus,” Linda said.  “It only cost $1.20 to get rice and beans at my school, so that’s what I was eating.” Dr. Kelly suggested going to a low-cost clinic.

Linda talked to several clinics before selecting one. She raised money on a website, the largest contribution coming from a friend in Canada.  Mango got her surgery but the stitches holding the incision together quickly came out. “It was a gruesome thing. Her intestines came out,” Linda said.  “Everybody thought she was going to die.  I took her back and they sewed her up again – and the stitches came out again.”

This time, Linda found another veterinarian (on Christmas Eve), who repaired the damage and ordered Mango confined to a cage for a month as she healed. “After that month she was cage free and was as good as new,” Linda said.  “Today, she’s doing very well.  I give her everything that I can.”

And, she added, “I can’t believe I went through all of that.  I had to get extensions on all my essays and I had to leave classes early to pick Mango up.”

Linda believes that Angel Fund played a major role in saving her cat’s life. “Without them, I don’t know if Mango would have been in condition for what came next. The time she was in the hospital [at Happy Pets] bought some time for me to make plans for what to do.  I’m very grateful for what Angel Fund did for Mango.”

She also praised Dr. Kelly: “She is very compassionate and very caring.  I know she did it for Mango.”

And, she said, “It’s amazing how people, even if they don’t know you, they love animals.  I’m very grateful for what everyone has done for Mango.” 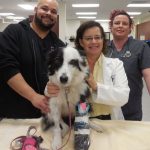 “Rock star” Therapy Dog Gets Sidelined with Cancer
Jane Horsfield and Dan Balza of Fountain Valley, California, adopted their dog Kiss at six-months-old when her previous owner no longer had time to train her for flyball. Through the years, Kiss’ super energetic nature has made her a perfect participant in flyball, agility, and nose work competitions as well as in recreational dock diving and K9 Disc.

Named after the rock band Kiss because of her black and white face, her outgoing nature also made her an ideal candidate for pet therapy work. As part of the Animal Health Foundation, an affiliate of Pet Partners, Horsfield and Kiss started visiting adults and children at local hospitals as well as elementary schools where children practiced their reading skills with Kiss sitting by their sides.

“There is not a person she doesn’t love to meet,” says Horsfield. “She loves everyone, and everyone loves her.”

As a “rock star” therapy dog, Kiss also gets invited to special events around town to raise awareness and money for skin cancer awareness through the local Rotary Club. It was during an event that Jane noticed some swelling above Kiss’s front left paw.

“At first, I thought it was related to her athletic activities,” says Horsfield. “So, I put some ice on her leg when we got home, and it looked a little better the next day.”

The family had been down this road before

But a week later, Kiss’ lower front left leg still looked swollen. Her veterinarian, Dr. Wayne Kopit of Brook-Ellis Pet Hospital, biopsied the lump and called Horsfield the day after Thanksgiving with the results. Kiss had a soft tissue sarcoma on her leg.

He decided to refer Kiss to Southern California Veterinary Specialty in Irvine, California for the cancer treatment.

Never in my wildest dreams did I expect it to be cancer,” says Jane. “The news struck terror into my heart.”

That’s because the previous Thanksgiving, the couple also had received cancer news about their dog Sheila. She died seven months later despite extensive surgeries and treatments to save her life. Unfortunately, the heartbreak doesn’t end there. The couple has lost four dogs to cancer through the years.

“My veterinarian says 50% of dogs die of cancer these days, and that none of the cancers my dogs have had have been related,” says Horsfield. “But that doesn’t make the news any easier when it’s your fifth dog with the diagnosis.”

When Horsfield contacted the Animal Health Foundation to let them know about Kiss’ diagnosis, they told her that Pet Partners had grant monies from the Petco Foundation’s Pet Cancer Awareness campaign to help therapy dogs with their cancer treatments.

A $3,000 grant provided help with Kiss’ surgery and chemotherapy. “We had already spent thousands on Sheila’s treatments, so we really needed this support to help Kiss,” says Horsfield.

In the past, doctors might have amputated Kiss’ leg because of the difficulty in removing the entire tumor. But a new therapy combined surgical removal of the tumor with chemotherapy beads implanted directly into the tumor site. “The beads dissolve over four to five weeks releasing chemotherapy drugs to where it’s needed most,” says Horsfield.

So far, the results are good. The tumor hasn’t grown back, but Horsfield checks the leg daily, since if it returns, it will come back in the same spot, doctors say. She and Kiss are making therapy visits again, and Kiss is participating in some of her favorite sport activities on a limited basis.

“She won’t officially be out of the woods for 18 more months,” says Horsfield. “But in the meantime, we’ve got our sassy girl back. I am grateful for the help in saving her life. I never had kids, so my dogs are everything to me.”