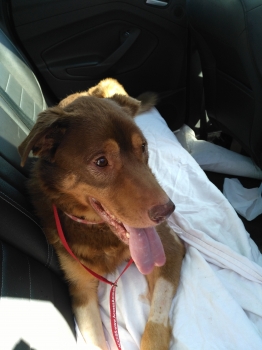 A Generous Donation Was Made By

I don't know where to start. I've never really typed or talked about something like this. Our dog Athena passed away today Saturday, October 21 2017 and I wanted to talk about the parts of her life that we knew specifically the beginning when we picked her up from the pound and the end of her life. When we got Athena she was just a puppy with feet too big for her body, it was almost funny seekng her run because her back legs would almost come in front of her front legs. The pound had said she was around 5 to 6 months old and she wouldn't get much bigger than she already was which was around 30 pounds, this was a lie she would grow to be much bigger. When we picked Athena the front desk of the pound said she would be ready to go home in 3 weeks and my mom was relieved at this fact, she thought she had time to clean and prepare the house for a new puppy, but then 10 minutes later they brought her out with a new leash and said "here's your dog ready to go home with you". My mom didn't say much of it but I could feel she was panicking. When we we're trying to think of names my mom said jokingly "hey what about Athena" and I absolutely loved it. I thought it was perfect for her, my dad agreed with me and we finalized on the name Athena. So about a year passes when we got Hunter and initially they hated each other, my mom read an article that said don't introduce new dogs in the home do it some place else like the front yard. That was the worst thing we could have done, both dogs started snarling and barking at each other, practically the whole neighborhood came out thinking we we're starting a dog fight. Athena and Hunter soon became good friends. Fast forward about 3 years and we got Ralph the cat, I'm sure if you know my mom or dad you have heard Ralph's story more than once. Anyway Athena was very curious about 3 week old Ralph and my parents weren't sure about letting them be in the same room together yet and told me not to let Athena in unless they were both there, let's just say I didn't listen to that and it was a good thing I didn't listen. I opened the door and allowed Athena and Hunter to come in with the cat and myself. The Ralph, Athena, Hunter, and myself all fell asleep on the bed with no problems otherwise. Fast forward again another 3 years and we get to the first sign of cancer. We noticed it first right behind her front leg, it was a small bubble under her skin. We took her to the vet and they removed it with no problem, they said we caught it early and it only had a one percent chance of coming back later. It was another 4 months before it came back, and it came back much worse this time, she had big bubbles from the initial spot behind her arm all the way up to her armpit. The doctors did their best to remove it but said it was deeper and their might be more of it. They ran tests and said that it was better. But Athena stopped eating and drinking so we took her to the vet and they put her on an iv for about a week when we decided to take her off of it because of how sad and defeated she looked. She started eating little bits of food here and there but not enough to keep her healthy, she lost about 30 pounds and was very skinny near the end. My dad started to blend her food and feed her though a bottle and we thought it was helping her and everything was looking up including her tests from the vet's office. We all thought she was going to be as fine as she could be and be with us for a little while longer. But yesterday Friday October 20, 2017 she went to sleep and didn't wake up. My family is holding on to the fact that at least she passed peacefully and at home not in a doctor's office hooked up to a bunch of machines. This was Athena's story, she lived a good and happy life for 8 years. In the loving memory of Athena, we will miss you.
View Other Memorials Request A Memorial