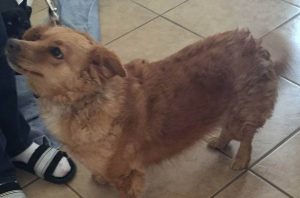 A week and a half before Christmas in 2014, Mary Parmer and her son Bill were in her Apple Valley home when there was a sudden eruption of noise outside – barking, snarling and shrieking.

They quickly investigated and discovered their two small dogs – a Corgi mix named Lucy and a Chihuahua mix named Lady under attack by three large dogs in the yard next door.

Before the three large dogs, including a Boxer mix and a Pit Bull mix, could be chased away from the smaller dogs, Lady was dead and Lucy had suffered severe lacerations.

Mary is a retired widow who worked part-time for 25 years at Victor Valley College and Bill had been laid off from a maintenance job there so there was little money to pay Lucy’s bills.  The hospital suggested Angel Fund, which stepped in with $500, a sum matched by the hospital. Mary is grateful for the assistance that saved her pet’s life. A daughter helped her with subsequent veterinary bills.

Lucy still shows signs of the trauma she suffered.  Now about two years old, “she has good days and bad days and every now and then you can tell that her wounds still bother her,” Mary said. “She has trouble jumping. She is usually a very active dog and sometimes she gets real still and doesn’t have much energy.”

Before the attacks, Lucy slept on her bed, Mary said.  Since Lucy could not jump up on the bed during her recovery, Mary made herself a bed on the floor and slept there with Lucy for a few weeks after her surgery.

For a long time after the attacks, Mary said, Lucy would go out in the yard and look for Lady. “She missed her so much.  So we went out and got her another pal. They have a great time together.” The new dog is Crystal, also a Chihuahua mix.

Lucy came to Mary’s house originally when a friend found her at the side of the road not far away.  “She couldn’t keep her so we took her in. We checked with animal control and people in the neighborhood but no one claimed her.” That was about six months before the attack by the neighbor’s dogs.

The two yards are separated by a wooden fence. “I don’t know how our dogs got into their yard. I think the big dogs dragged them through the fence,” Mary said. The three large dogs still live next door, although all is now peaceful.