August 10, 2016 by The Animal Health Foundation 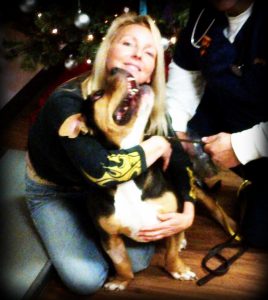 In December, 2014, Lisa Marie Sirko, who had gone to the Downey Animal Shelter to check out another dog, saw Mickey for the first time. Though he was emaciated and sick, she was impressed: “I saw this Rottweiler-Pit Bull head and a little short stubby body and I said: ‘Oh my gosh, what an amazingly adorable dog! What is he doing here?’

“So I had to get him out [of the shelter]. When I got him home and started feeding him, he ate pretty well.  But then he started vomiting. And he had diarrhea really bad and I there was blood.  So I took him to Lomita Pet Hospital and Dr. Sandra Kim.”

Mickey defecated part of a child’s stuffed animal that he had ingested – and it was nearly the size of his stomach. The hospital did surgery to remove other remnants of the toy that might be in his stomach or intestines.  Lisa Marie and Dr. Kim decided that Mickey probably had been very hungry and swallowed the stuffed toy in a search for food. “When people leave a dog in a fenced-in yard and don’t feed him, he will try to find something to eat. He was starving and ate that stuffed animal,” Lisa Marie said.

A few weeks after Mickey’s surgery, Lisa Marie put him in the back seat of her car. As she drove, a cat ran across the street and Mickey jumped up on the armrest near the side window. “His little legs hit the window button and the window started going down. I couldn’t roll it up because his foot was on the remote in the back seat. I pulled over and he jumped out of the window and his right rear foot hit the curb and fractured.  “I was overwhelmed with guilt. But I got him back in the car and took him to Dr. Kim.”

The veterinarian did surgery on the leg and put it in a cast. Lisa Marie, who had a small employment talent search company at the time, was struggling to make money in an economy in which companies were down-sizing and her rates had been discounted. (She later shut down the company to devote full time to saving dogs that she sees as discriminated-against breeds: Pit Bull, Rottweiler and Mastiff). She applied to Angel Fund for assistance.  She got help – for which she was grateful – from both Angel Fund and Lomita Pet Hospital.

Today, Mickey is doing well.  But, after two years of healing and rehab, Lisa Marie gave him to a new friend. “I wanted to keep him but I came across somebody who had lost his dog, who looked almost exactly like Mickey. He fell in love with Mickey. And I thought Mickey could fill his broken heart – which he did – and get all the attention in the world.  I still see him.  He’s my little step boy. But he’s No. 1 in somebody else’s life now.”

And Lisa Marie is working hard at finding, rescuing and rehabilitating discriminated-against dogs. It is work of passion and love for her. “Now I’m building a little team and I’m starting to plan a nonprofit to help these dogs. It’s hard being a one-woman show.  I don’t spend money on myself and I get some income from helping people train their dogs. And animal lovers will ask if they can donate to help the dogs. We get surprised by gifts such as a bag of dog food or a doggie bed. And it all makes a huge difference.

“I keep it small. I’ll usually have just three or four dogs. They’re healthy, they’re well fed and exercised. And they know the basic commands. More than half the dogs I have saved are therapy dogs, some with service certification.

“I always do what’s best for the animal. And I like quality over quantity.” Lisa Marie works out of her home in San Pedro.