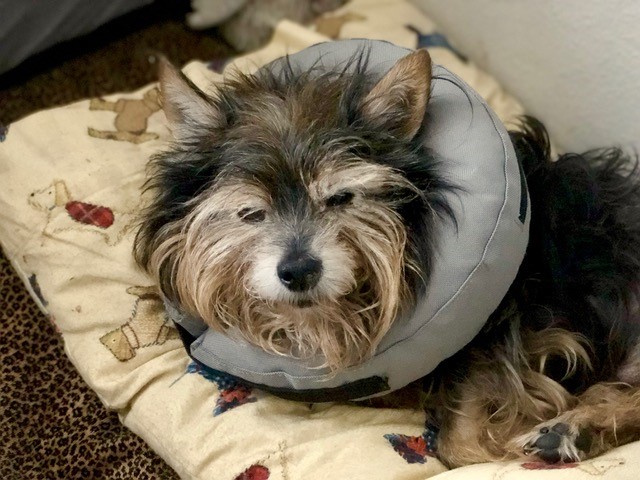 In October, 2018, Marta Kepes was out with her three dogs.  Ralph, a 14-year-old terrier mix, was coupled with one of the other dogs on a leash.   “Nothing unusual was happening and suddenly he let out a sharp yelp,” she said.  “His left rear leg was all twisted and he was in agony.  I’ve never seen any of my animals like that before.”

It was in the evening and she took Ralph immediately to Center Sinai Animal Hospital in West Los Angeles.  The doctor told her that Ralph’s hip had come out of its socket.  The doctor said the hip could be put back in the socket but it appeared that the ligaments were torn and that might necessitate surgery.  A surgeon, who could do the operation, was coming the next morning, the doctor said.

Marta, who lives on a monthly SSI disability check, told the doctor about her financial situation.  “It is pretty grim,” she said in the interview. “I had three elderly dogs.  Ralph was the youngest.  So this was like, oh my god!  The prices of everything have skyrocketed in the last decade.  But I said, ‘Yes, of course,’ to the surgery.“

She said that Center Sinai had permitted her to carry a balance on bills for her animals, between $100 and $200, on which she made monthly payments, with the understanding that she would have to pay off the debt before incurring new expenses.  “I made it very clear that I would have to continue the same system with them to pay for the surgery,” she said. “The person who checked me out said that would be no problem.”

She brought Ralph back the next morning and met the surgeon, who told her she was very glad that she had brought Ralph in.  Marta picked up the dog later in the day.

She got a call after a day or two from the hospital and was asked how she planned to pay for the surgery.  She answered, she said: “I don’t have any other way to pay than the way I’ve been doing it.”

When she brought Ralph back for a checkup, the surgeon was there and berated Marta, she said, telling her that she would not have done the surgery if she had known that Marta could not pay for it on the day of the procedure.

But the person who manages accounts at the hospital told her not to worry about what had happened and asked if she would be willing to apply for a grant.  “‘Of course,” Marta replied.  Soon she was approved for a $1,000 grant from Angel Fund. The grant was matched by Center Sinai.

Marta was grateful for the help.  But about two months after the surgery.  Ralph started going downhill.  “I don’t think it was because of his leg,” Marta said.  But it was clear that he was near the end of his life, she said. She did not take him to a veterinarian because of the bills she owed.  She found a euthanasia service that would come to her home and put the animal down if she made a down payment.

Recently, she called the euthanasia service to come again to put down one of her other dogs.  Today, her household includes two cats and one dog, Stella, a dachshund who is partly blind.

“All of this is really tense for me,” she said through tears.  “Stella is really lonely now.”

When “things get calmer,” Marta said, she will “maybe proctor an older dog from a rescue group that would pay the medical bills.  That I can do.”

Marta said that she had lived on her own all her adult life.  She is 67 and once held a job.  But she has had back issues, including surgery, and has been diagnosed with rheumatoid arthritis.  A few years ago, she lived in her car with her three dogs and three cats for about three years.

After she receives her SSI check each month, she goes to the store to buy supplies for herself and her animals and she sometimes will put some gasoline in her van – “a gas guzzler,” she said.  She does not drive often because of the high cost of gasoline.

Tags:
Posted in: Angel Fund Grant Recipients
Previous: Household Poisons to Keep Away From Your Dog
Next: Coconut oil: The “good” saturated fat