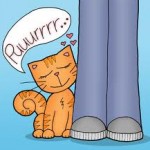 Veterinarian Barbara Sherman, director of the N.C. State Veterinary Health Complex’s Behavioral Medicine Service, says cats purr during moments of positive interaction, including owner-cat and cat-cat interactions. A purr is a vibration of the vocal folds, composed of sound bursts that occur some 25 times per second, Dr. Sherman explains. Most but not all felids purr, Dr. Sherman notes, but she says lions, jaguars, and leopards roar instead. The Charlotte Observer (N.C.)/Ask a Scientist blog

What a pleasure to have a cat sitting in one’s lap, purring loudly! Cats are thought to purr in order to maintain contact with other cats or humans. This may be when the cat appears to be expressing contentment, as sitting on the lap of a familiar person.

One investigator put throat microphones on free-ranging cats and recorded their purring. She found that purring occurred in a wide range of circumstances, including the presence of the cat’s caretaker, when greeting another familiar cat, during tactile stimulation such as rolling or rubbing, and during drowsy sleep, particularly in warm, familiar environments. Female cats purr when nursing their young; kittens purr while nursing. Some situations appear to “turn off” purring, including aggressive or sexual interactions; while hunting, in the presence of prey, and upon first exposure to catnip.

In general, purring is associated with positive cat-human interactions or positive cat-cat interactions. In addition, purring may occur just prior to sleep or, surprisingly, when in pain. When veterinarians examine a cat presented for emergency treatment after having been hit by a car, they may note that it is purring.

Q: How do they make that characteristic sound?

Purring is triggered by a signal from the central nervous system. As the cat inhales and exhales, the vocal fold muscles in the larynx vibrate to produce sound bursts. These sound bursts occur every 30 to 40 milliseconds (or approximately 25 times a second) and result in the familiar purring sound. Purr frequency is independent of cat age, size, weight, or sex, and is easily audible to a nearby person or cat.

While purring, cats can simultaneously produce other vocalizations, including cries. An example is well-known to cat owners: the plaintive “demand” cry of cats, which can be heard when opening a can of cat food at feeding time.

Q: Do any other animals (domestic and other) exhibit similar behaviors?

The purr is highly characteristic of felids. The famed naturalist Charles Darwin noted that, in addition to the house cat, the puma, cheetah, and ocelot purr. The large roaring cats, such as the lion, jaguar, and leopard (in the genus Panthera), do not purr.

One response to “Feline purring, explained”