Guinea pigs suffering from itchy skin may have species-specific lice, a mite infection called sarcoptic mange or the fungal infection known as ringworm, writes veterinarian Jeff Kahler, who notes that ringworm can be transmitted to people from their guinea pig. A veterinarian can distinguish between the three using 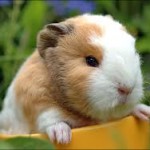 microscopic evaluations of skin and hair from the guinea pig as well as a fungal culture. The Miami Herald/McClatchy Newspapers

When Allison told her mom that her guinea pig seemed to be scratching herself a lot, Allison was told to clean out Poppy’s cage. Young Allison put in a fresh bedding of cedar chips mixed with pine shavings. Poppy seemed to scratch less, but the improvement was short-lived. The scratching is now to the point of waking Allison up at night, and when Allison pets Poppy, she can feel scabbing along the cava’s back.

I do not recommend cedar shavings for any rodent or rabbit. It can be very irritating to the respiratory tract in these animals. The list of possible causes for pruritus, or itchiness, in guinea pigs is long, however three causes make up the lion’s share of these cases. While either of these three could be placed at the top of the list, I will start by focusing on sucking and/or chewing lice. In my clinical experience, I see this as the most common cause of pruritus in my guinea pig patients.

Lice are parasites. They can be found in many different species of animals from fish to birds to mammals, including humans. Most often, the type of lice involved with one type of animal is specific to that type of animal. In other words, lice from guinea pigs will not infest a human. In guinea pigs, these unattractive little creatures gain access from one guinea pig to another most commonly through direct contact, though lice can be transmitted through substrate such as bedding materials and also through food, especially bulk food.

Once these lice set up “house” on their hosts, they begin feeding by biting or sucking on the skin surface. As one might imagine, this is quite pruritic and irritating. Poppy’s scenario certainly fits with the possibility of an infection with lice.

Some people can see lice with their naked eye; I can not. I use clear plastic tape, placing it sticky side down in an itchy area of the pig’s skin. I then take the tape and stick it to a microscope slide and look at it under magnification for the presence of lice and/or their eggs.

Treatment for lice in guinea pigs involves using an oral or injectable medication two to four times, with two weeks between each treatment depending on the severity. The two-week interval allows the eggs to hatch and the lice killed before they lay new eggs. I also recommend treating the environment every four days by removing and replacing the substrate and spraying with a spray containing the same ingredient as the medication used to treat the guinea pig. This therapy should rid the guinea pig of lice.

Mange is another cause of pruritus. It is caused by mites. These are specifically sarcoptic mange mites that burrow into the guinea pig’s skin and cause irritation and pruritus. The pruritus can be quite intense, to the point where some patients go into seizures. Diagnosis for mange involves scrapping the skin and putting the scraped contents on a microscope slide and observing the mites and/or their eggs under magnification. These mites can not be seen with the naked eye.

The last of the “big three” possible causes for Poppy’s itchy skin in fungal infection of the skin. This is commonly referred to as ringworm, though it involves no worms. This skin disease is caused by a fungal organism that colonizes the skin and causes an inflammatory response that is intensely pruritic. We diagnose this disease by growing the fungus on a special growth medium specifically designed for this purpose. Treatment usually involves oral and topical therapy, including bathing with specific anti-fungal shampoo. Prognosis for recovery is good. An important point to note here is that guinea pigs can transfer ringworm fungus to people.

Poppy likely has one of these three. A visit to her veterinarian for diagnostic tests will lead to a diagnosis and a cure.

(Jeff Kahler is a veterinarian in Modesto, Calif. Questions can be submitted to Your Pet in care of LifeStyles, The Modesto Bee, P.O. Box 5256, Modesto CA 95352.)

Read more here: https://www.miamiherald.com/2012/07/25/2911346/pet-vet-poppys-itch-may-be-due.html#storylink=cpy
Tags:
Posted in: Medical Issues | Other Pets
Previous: Cats more likely to trigger allergies than dogs
Next: Connecting with animals is possible, even without pets at home