July 5, 2012 by The Animal Health Foundation

Veterinarian Kent Allen, the foreign veterinary delegate for the 2012 Olympic Games, explains his role as well as the duties of the other veterinarians who work at the Olympics. Dr. Allen oversees all aspects of the equine athletes’ testing and pre-competition exams, while other veterinarians provide medical attention and perform diagnostic and drug-screening tests.

Kent Allen, DVM, was happy to hear from a reporter from TheHorse.com.

“I was going to call Stephanie [Church, editor-in-chief] and suggest that she do a story explaining what all the veterinarians at the Olympic Games do, but then you called,” he said.

Allen, who owns Virginia Equine Imaging in Middleburg, Va., is well known in the world of international equestrian competition. A preeminent sport-horse veterinarian and lameness diagnostician, he is a veteran of the International Equestrian Federation’s (FEI) Veterinary Committee who has served as a veterinary official at two Olympic Games (London 2012 will be his third) and at the 2010 Alltech FEI World Equestrian Games. Allen has also served as a U.S. Equestrian Team veterinarian and as a member or chair of numerous additional veterinary committees in the United States.

A major international equestrian championships requires several layers of veterinary personnel–and they don’t all necessarily do what you might imagine. Allen helped us to sort it out. 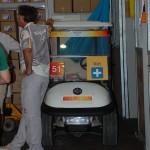 At the 2012 London Olympic Games, Allen will be the foreign veterinary delegate.

“You know what a technical delegate is?” Allen asked. (A TD, sometimes known as a steward, is the official at a show who ensures that everybody plays by the rules.) “Well, I’m the veterinary technical delegate. [My job is] making sure everyone–veterinarians, ground juries, competitors, and so on–follows the rules as they pertain to the FEI veterinary rules.”

And as the job title suggests, the foreign veterinary delegate (FVD) must be of a nationality other than that of the host country.

The FVD has the important pre-Games role of working with the Olympic organizing committee (for London, LOCOG) to ensure that the “veterinary and medication control infrastructure,” to quote the FEI Olympic rules, is correct. Then in London, Allen will work closely with the five members of the Olympic equestrian Veterinary Commission, who together supervise the veterinary procedures of the entire competition.

An FEI-governed competition is conducted under FEI rules–and there are a lot of rules. The FEI Veterinary Regulations alone fill 90 pages, and as the Olympic FVD Allen has to know them all.

One rule that may surprise you: Veterinary officials, including the FVD, are “forbidden from hands-on veterinary care,” Allen said. Actual treatment of horses falls to the designated “treating veterinarian(s),” who may administer FEI-legal treatments with approval from the Veterinary Commission.

Also under the Veterinary Commission’s jurisdiction are the team veterinarians, who are appointed by the various national federations (in the U.S., the United States Equestrian Federation) to travel with the equestrian teams. The number of team veterinarians varies with the size of the team(s) being fielded. In the case of the U.S., which fields an Olympic team in every equestrian discipline, the dressage, eventing, and jumping horses each have their own team veterinarian. A nation that sends only, say, a jumping squad or a couple of individual competitors may opt to designate a sole team veterinarian.

Just Say No to Doping

Finally, there are designated testing veterinarians, whose job it is to take blood and urine samples from horses to screen for prohibited substances. This process, too, is supervised by the Veterinary Commission.

“Our job is to make sure the horse is appropriately tested,” Allen said. “Once the sample goes to the lab, it’s out of our hands.”

“At an Olympic Games, there’s a set number of samples you have to test,” Allen said. “Some of them have to be random.”

The LOCOG Veterinary and Farrier Services Guide warns that, at the 2012 Olympics, “The number of horses tested will be greater than at any previous Games.”  If you followed the equestrian events of the 2008 Olympics, you may recall that four jumpers tested positive for capsaicin, the “hot-pepper heat” substance; and also that the American dressage horse Mythilus tested positive for a nonsteroidal anti-inflammatory drug (NSAID). As a result, the Norwegian jumping team was stripped of its bronze medal and the U.S. dressage team failed to medal.

“It’s not a slap on the hand and a fine any more,” said Allen of the strict “FEI Clean Sport” anti-doping policy. “It’s getting to be more like [the anti-doping policies for] the athletes in other sports.”

The FEI Veterinary Commission’s most visible role may be in the veterinary horse inspections, also referred to as “the jog” or “the trot-up.”  For these formal presentations, athletes (usually the riders, but sometimes coaches) don their team garb and jog their horses in hand on a designated track so that the veterinary officials may assess what’s known as the horses’ fitness to compete.

According to Allen, there is an important distinction between “fit to compete” and “sound.”

“What I do every day in my clinic in Middleburg is watch horses trot so that I can evaluate soundness,” he said. His goal in such exams is to arm prospective buyers with an expert opinion as to horses’ soundess, or to help owners figure out why their horses are lame and then to prescribe treatment.

But in an Olympic horse inspection, the Veterinary Commission has the tough job of deciding whether a horse is physically up to the demands of the competition.

Doing so can be easy: The horse trots sound and moves freely. He’s probably good to go. But what do you do when you watch a couple of event horses that completed cross-country yesterday and today look a bit off?

“They may be sore in the feet, and they may not look too sound,” Allen said. “I send them to the hold” for evaluation and possible re-presentation.

Here’s the part of the horse inspection that the public (and the media) aren’t privy to: the vets’ findings.

In our hypothetical case of the two unsound event horses, “One may be sore to hoof testers, but the second looks like a bowed tendon,” Allen said. “The first horse may be judged fit to compete” (he’s ouchy, but the problem is temporary and competition isn’t likely to worsen his condition), “while the second may not be permitted to compete” because of the tendon injury. “But the horse judged fit to compete may actually be lamer” than the one that’s “spun.”

“It’s a bit of a Catch-22,” Allen concedes of the process. “I’ve been the person standing on the line, wondering what’s going on. There’s no way to know unless you’re in that little knot of people,” he said, referring to the veterinary officials. He defends the process, however, saying that riders and horse owners have the right not to have horses’ every boo-boo made public.

(One thing that traditionally is public, however, is the inspection itself. LOCOG drew the ire of horse-sport enthusiasts when it announced that the final Olympic eventing horse inspection would not be open to spectators. After international outcry and the resignation of a high-ranking eventing and Olympic equestrian official, LOCOG reversed its decision.)

Ultimately, “the [equine] welfare standpoint is exhaustively done,” Allen said, referring to the painstaking research and planning that goes into the production of an Olympic Games, a World Equestrian Games, or similar competitions. “The organizers have knocked themselves out to make things safe for the horse, but no amount of planning can cover every eventuality. All the test events, the planning–the foremost issue is, is it safe for the horse?”

After all that, and fully aware of the effort and resources that have gone into getting a horse to that horse inspection, “If at all possible, you want to let that competitor compete,” Allen said.

Happily, when I watched the horse inspections at the 2008 Olympics and the 2010 WEG, most of the horses appeared fit to compete and passed easily. But a few were held for reinspection, and I remember one horse in Hong Kong that did not pass the first inspection, meaning that he never competed at all. The Veterinary Commission is well aware of the gravity of such a decision, but it has a duty to uphold the horse’s welfare above all.