December 4, 2012 by The Animal Health Foundation 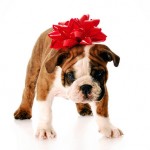 While a puppy or kitten under the Christmas tree may seem like the quintessential holiday gift, experts warn that pets given as gifts don’t always have a happy ending. Veterinarian Mollie Hurley advises against surprising people with animals as gifts, as they may not be prepared for the commitment. Animal shelter educator Deeann Schaefer notes that recipients of pets may not be financially or emotionally prepared for the responsibilities and often end up surrendering those animals to already overburdened shelters.

While the excitement of surprising a loved one with an adorable puppy or kitten may be tempting, pets are not like a sweater or piece of jewelry that can be easily returned or re-gifted.
“Pet ownership is not an impulse to jump into,” Dr. Mollie Hurley, of Stack Veterinary Hospital in Onondaga, said. “And by not talking it over with the recipient or really thinking things through completely, (giving or receiving a pet as a gift) might not be as enjoyable as it could be.”
Companion animals may live for 15 years, and need life-long care in homes where they are loved and treated as members of the family.
“We see it a lot,” Deeann Schaefer, humane educator at Wanderers’ Rest Humane Association, an animal shelter in Canastota, said. “The person they’re giving the pet to may not have time for it, they may not be able to afford a pet, and some of them may not even want a pet at that particular time.”
While a pet given as a gift initially costs the person on the receiving end little or nothing, there is no such thing as a “free” animal.
A spread sheet at aspca.org listed first-year pet care cost estimates — not including the cost of purchasing the animal — ranging from $1,314 for a small dog to $1,843 for a large dog, and $1,035 for a cat. Of course, that’s just for the first year, and as animals age, their need for veterinary care may increase.
Schaefer said that too often gift animals end up in shelters, which are already filled with unwanted pets. Or worse, they may be neglected, abused or abandoned. She estimates the number of dogs and cats at Wanderers’ Rest increases by at least 10 to 15 percent after the holidays.
“People realize they may have bitten off more than they can chew,” Schaefer said. “We see a lot of kittens and cats coming into the shelter six months later, when the cuteness has worn off. Same thing with puppies, eight or nine months later. Suddenly, it’s not the cute roly-poly puppy that was underneath the Christmas tree, it’s a dog that’s chewing up your furniture.”
Hurley said adding a young animal to a household at this time of year presents special challenges.
“During the holidays there’s a lot of chaos, it’s a hectic time. People have a lot of things going on and may not be able to pay attention to the pet’s needs,” she said.
Hurley also cited the health risks of young animals ingesting ribbon and other holiday items, and added, “Taking a puppy outside every couple hours to get it potty trained in the winter is certainly not easy,” she said.
Schaefer said the phones are already ringing at Wanderers’ Rest. “We actually have people calling and asking us, ‘When are you getting your puppies in?’ like we’re Kmart or something,” she said.
Schaefer recommends, instead, giving a pet-themed gift basket and a gift certificate from a shelter, which would allow the recipient to personally pick out his or her own animal.
If a person says they want to adopt a dog or cat to give to someone else, Schaefer said Wanderers’ Rest requires the recipient to come in and confirm that he or she does indeed want the animal.
“Is it going to ruin the surprise? Yes, but we want every family member on board.” Schaefer said.

Costs of owning a pet include expenses for: Food and treats. Collars and leashes. Bedding. Veterinary care, including vaccines, medications, spaying and neutering, heartworm, flea and tick prevention. Grooming. Training, boarding or pet sitting. Fencing or containment systems. Time to exercise, play with and train the animal.