January 7, 2013 by The Animal Health Foundation 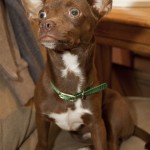 In August, 2011, Oksana and Eric Schwartz took their two dogs to a dog park not far from their West Hollywood apartment.

“A man came over to us and said he had found a dog tied up to a pole there and asked if it belonged to somebody,” Oksana said. “The dog [a chihuahua] had this little harness on and he had grown into it and it wouldn’t buckle up any more. It was so tight I couldn’t pull it over his head.  We had to cut it off. He was really underweight and had a broken leg.

“My husband has a soft spot for little dogs and he said: ‘Well he’s not ours but we’ll take him and  . . . see what we can do.’ We took him to Blue Cross Pet Hospital in North Hollywood. We’ve been taking our dogs there for a long time. And it turned out the dog had a broken hip on top of the broken leg.

Dr. James Walters, co-owner of the hospital, told the couple that the dog needed surgery. Eric is in the Marine Corps and Oksana works as a projects manager. She told Walters that they could not afford to pay for an operation. “‘We’d love to,’ I said, ‘but this is not our dog.’ My bigger dog was in a car accident less than six months before and we had been paying off that vet bill as well,” she said.

“The hospital offered to do the surgery for almost 50 percent off . . . so we finally decided to have it done. They had to put four pins, I think, in his leg. Our veterinarian told us after the surgery that somebody probably had kicked him and that the hip injury was a really old injury.”

The hospital took more than $700 off its bill and helped the Schwartzes obtain an Angel Fund grant. Oksana created a Facebook page for Murray, as they decided to call the dog, and a couple of friends contributed, too. “The fact that we got some help with the bill was really great,” she said.

“But we couldn’t find a place for him. Nobody really wanted a dog that had a broken bone,” Oksana said. “I really didn’t want another dog, either, because we live in a small apartment where we had two dogs to begin with and we weren’t sure if we could afford him.  But he was such a sweet little dog that we decided to keep him.”

Murray still has some issues that Oksana believes are related to how he was treated before he came into her life. For instance, she said, “in the middle of the night, if he’s sleeping on our bed and you accidently touch him with your foot, he can have a freak-out moment where he starts growling. But usually if you just hold him down, he’s o.k. and he’ll calm down and go right back to sleep.”

“Since we’ve had him, he’s 100 percent better than when we found him. He was about six pounds then. Now he’s about 10.  He wasn’t using his leg for a long time and the muscle had deteriorated so we had to train him to use it again. And now the muscle is slowly coming back.

“He’s a great addition to our family. He’s super sweet and smart and he wants to get petted all the time and he cuddles. He loves playing with our bigger dog and our little girl dog takes care of him like she’s his mom.”