January 29, 2013 by The Animal Health Foundation 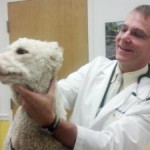 Veterinarians and other scientists have been studying canine cancer patients’ DNA to identify mutations involved in several types of cancer, many of which also affect humans, such as lymphoma and osteosarcoma. The findings will likely lead to better diagnostics and treatments for animals and humans alike. “The key to unlocking some of nature’s most perplexing puzzles in human health has actually stood right next to us, wagging its tail,” said Matthew Breen, a genomics professor at North Carolina State University’s College of Veterinary Medicine. Santa Cruz Sentinel (Calif.)

Jasper, a 7-year-old rescue dog from San Jose, has a personality that endears him to everyone — even to cats. He also has lymphoma, a cancer that sprouts from the body’s defense system and is similar to non-Hodgkin lymphoma in people.

Right now, Jasper’s treatment plan is based on laboratory tests, ultrasounds and the expertise of his veterinarian, Linda Fineman, a cancer specialist at the SAGE center in Campbell. Although he’s doing well after his first round of treatment, the hardest part is not knowing how long it will help him, said his owner, Catherine Jacobsen.

In the future, however, tests on Jasper’s DNA could determine the best medications for him and show how long they’ll work, according to scientists who study the DNA of dogs. And those researchers are increasingly discovering that cancer and other diseases are caused by the same genetic mutations in pooches and people.

“The key to unlocking some of nature’s most perplexing puzzles in human health has actually stood right next to us, wagging its tail,” said Matthew Breen, a genomics professor at North Carolina State University College of Veterinary Medicine.

Scientists got a huge new asset when the first national canine tumor bank opened at the end of October, Breen said. Researchers now have a one-stop shopping source of samples from the bank, developed as part of the Canine Comparative Oncology and Genomics Consortium in Bethesda, Md.

Our four-legged friends are good models for studying human disease because they share our environment, so they’re exposed to the same factors that may lead us to develop cancer, said geneticist Heidi Parker of the National Human Genome Research Institute in Bethesda.

“They’re living life with us and getting old like the rest of us,” she said.

But the shorter lifespan of dogs means they get cancer faster, so scientists don’t have to wait decades to find out which treatments work better, said Michael Kent, co-director of the Comparative Cancer Center at the UC Davis School of Veterinary Medicine.

Centuries of close breeding in canines have made it easier to hunt for genetic links to disease. When breeders select for specific features in dogs — a curly coat or a stout body — they unwittingly choose other traits, Parker said. In time, certain maladies became linked with particular breeds: Dobermans frequently have blood clotting disorders, and dachshunds get day blindness.

Once scientists find the location of DNA that causes a disease in dogs, they also have a better idea of where to look for the faulty genes in people. With a common genetic basis for disease, researchers can use similar tools to fight cancer in canines and humans.

When Molly got a lump in her mouth, the biopsy for the 12-year-old beagle from Aptos determined it was a melanoma, the most common malignant cancer in a dog’s mouth. Fortunately, there’s now a vaccine to help fight this cancer, said Dr. Theresa Arteaga, Molly’s oncologist at Pacific Veterinary Specialists in Capitola.

Scientists knew that only melanoma cells make a protein called tyrosinase. So a team of researchers that included Arteaga tested a vaccine for dogs that tricked the immune system into attacking the cells with tyrosinase. The vaccine stopped tumor growth. In many cases, it also kept the cancer from spreading.

People get melanomas, too. Unlike the cancer in dogs, tumors in humans tend to show up on the skin, but the cancer still uses the same gene for tyrosinase. So after the vaccine was successfully developed for dogs in 2007, those studies led to approval of similar vaccines for clinical trials in people.

Osteosarcoma is another disease in which canine research has already boosted treatment for people. This cancer is common in big breeds, such as great danes and Irish wolfhounds. It usually attacks the leg bones and then travels to the lungs. In people, it’s often a pediatric disease, afflicting fewer than 1,000 patients a year. It’s hard to study in children because so few get the disease, but more than 10,000 dogs are diagnosed with it annually.

Even after surgery to remove the cancer, osteosarcoma still spreads to the lungs — in dogs and people. Researchers, however, discovered that this cancer changes the DNA of dogs in several ways. With that information, they found more effective cocktails of drugs and lowered the rate of the cancer spreading to the lungs. These findings led the U.S. Food and Drug Administration to fast-track approval for similar medications for people, leading to longer life expectancies, said veterinarian Cecile Siedlecki, a cancer specialist in San Leandro who also consults with physicians.

Although scientists have studied the similarity of health problems at both ends of the leash for decades, research exploded after the entire genome was sequenced for a boxer named Tasha in 2004 (about a year after the human genome was first sequenced), said Elaine Ostrander, chief of the cancer genetics branch at the National Institutes of Health in Bethesda. Results of the Dog Genome Project were stored at a group of institutions, including UC Santa Cruz, and made available to researchers around the world.

Gleaning links to disease from dog genes is like a long, long game of fetch. It’s played with short sequences of DNA. Each snippet of the genetic code is made with combinations of only four building blocks: A, T, G or C. The sequence of those combinations create orders that tell every cell exactly how to make everything the body needs.

If that sequence gets shuffled — mutated — then something gets built incorrectly. Sometimes, those errors cause disease.

So scientists search for tiny variations in those building blocks of DNA, called SNPs (single nucleotide polymorphisms), which show up in dogs with specific traits. Any change at these key locations in the genome are compared with DNA samples from healthy dogs and samples from diseased dogs to find those SNPs linked with the disease. From then on, it’s a matter of finding the genes tagged to the SNPs, explained Breen, of the North Carolina State University College of Veterinary Medicine.

The more tumor samples from dogs that are available for scientists to study, the faster they’ll learn the genetic mechanisms that cause disease, Breen said.

Hundreds of owners have found the courage to get samples taken from their dogs and sent for studies, Breen said. “Their dog might make a difference for the next generation.”

And some of that next generation might walk on two legs instead of four.

Registration just opened for the Canine Lifetime Health Project, managed by the Morris Animal Foundation in Denver. The long-term study follows dogs into their senior years. Researchers will gather information about everything from dogs’ daily eating and exercise routines to annual lab tests. Then scientists will sift through that data to link factors like health, genetics and environment to cancer and other diseases. The project is enrolling 3,000 pedigreed golden retrievers, younger than 2 years of age, but any dog owner can join the list for later studies, said project director Mike Guy. Even people without dogs can sign up for updates, he said. For information, go to www.caninelifetimehealth.org.