February 28, 2013 by The Animal Health Foundation 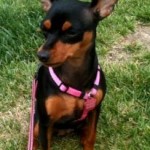 David Alvarez has a real love for his minpins.  He got his first dog Coco about four years ago and loved her personality so much that he didn’t hesitate when his cousin called offering to give him another one.  She had two little, active girls and having an active minpin in the house just wasn’t a good fit for her.  So, last summer David brought home his second minpin and promptly named her Kiki.

Sure enough, Kiki has a spectacular personality of her own.  Quiet during the day when she and Coco are home alone, Kiki becomes energetic and up for anything when David arrives home.  As soon as Kiki sees the leash, she goes bonkers with anticipation for the walk to come.  Usually David takes his two dogs for a long walk down to a cove near where he lives and lets them run around.  The favorite part of his day is seeing Coco and Kiki tearing off after each other.

About a week after David brought Kiki home, Kiki began vomiting and stopped eating and drinking.  Concerned, David brought her to his vet at Santa Margarita Animal Care to see if they could discover what was wrong with her.  Dr. Amy Parker was the attending veterinarian on this case and remembers it well.

When I felt her belly, I could feel a little mass effect in her abdomen associated with her GI track,” recalls Dr. Parker. “David had told me that she had torn apart a peepee pad and we worried that perhaps she had eaten some of that.  We wanted to do x-rays, at which point David informed us that he was financially constrained and probably wouldn’t be able to afford much.  Since Kiki was just a four month old puppy, we wanted to find a way to work with her and David, so we went ahead and ordered the x-rays which ended up indicating that she had a foreign contaminant in her body.”

The cost of the surgery was far beyond anything David could afford on his own. Although he just started working at the time he first got Coco, David’s finances were still in a bind.  David didn’t know what to do and couldn’t bear the thought of letting Kiki go.

“I told Dr. Parker I didn’t have any money, says David.  “When they told me that they would help me and that there were some foundations that might be able to help, too, I just couldn’t believe it.  They asked me to fill out paperwork, which I did right away, and I worked out a plan with them to get Kiki the help she needed”.

Between Santa Margarita Animal Care, the Angel Fund, and David, enough funds were collected to enable the surgery that Kiki so desperately needed.  Thankfully, the operation was a success and Kiki is back to running around the cove with David and Coco.

“We were very grateful to be able to help David,” says Dr. Parker.  “We just couldn’t euthanize this four month old baby, and this owner is working and trying to make a great life with his pets.  We wanted to help him in any way possible and we’re thankful the Angel Fund was part of that.”

David echoes the feeling of gratitude and has a message for Santa Margarita Animal Care and the Angel Fund. “I want to say thank you for helping me keep my pet around.”  He says, “She’s my companion, and it means the world to me that there are people out there who are actually willing to help other people with their difficult situations.”