February 25, 2013 by The Animal Health Foundation 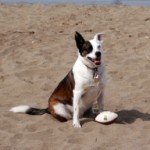 by Alice Villalobos, DVM at Animal Oncology Consultation Service and founder of Pawspice, hospice for pets.

Since Murph was a special needs dog since puppyhood and neurological issues, it probably took everyone much longer to figure out that something was wrong.

Murph developed a strange awkwardness with his right front foot.  At first he seemed to just be swinging his foot out wider than his normal clumsy gait.  When x-rays were taken, Murph was diagnosed with bone cancer and it had already spread extensively to his lungs resembling a “snow storm”.

We entered Murph into Pawspice right away during our first visit because he had advanced metastatic bone cancer. Murph’s family wanted to help him live as long as possible with no pain and with a good quality of life.  We started gentle combination treatment.  Murph received a few palliative radiation therapy treatments to his bone cancer lesion on his right front foot.  He also received gentle oral and IV chemotherapy and immunotherapy with T-Cyte and supplements.

To our delight and surprise, Murph’s lameness went away and he was feeling great.  It was a joy to see that Murph’s awful pain was gone; the swelling of his right front paw and wrist was gone and he appeared to be back to his normal happy self.  At his 9 week recheck chest x-rays, we had the most amazing and surprising find!  Murph’s new chest x-rays were almost completely clear!

The horrible snowstorm of tumors in his chest had disappeared!  What a happy surprise for all of us to win such unexpected good news for Murph.

Another big bonus was that Murph, who seemed defensive at first, started to always feel just great during his cancer treatment visits at our Pawspice practice at ACCESS in Woodland Hills, CA.  as long as one of his stuffed toys was nearby!

Sadly, after having enjoyed his remission for several months, Murph’s chest tumors returned with vengance.  Of course, we never expected Murph to go into remission and thrive with advanced bone cancer but he did just that for months before his bone cancer was able to complete it’s fatal agenda.

That goodness Murph’s family had th courage and compassion to provide him with the final act of kindness, the gift of a peaceful and painless passing, with the gift of euthanasia when he needed it.