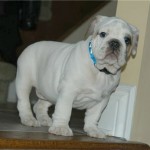 Summer means taking extra care to keep pets from overheating, an especially dangerous situation for brachycephalic breeds including pugs, bulldogs and others with short snouts or flat faces, experts advise. Other tips: Don’t leave pets in parked cars, where temperatures quickly soar to life-threatening levels; make sure animals have plenty of shade and cool water when outdoors; and walk pets early or late in the day to avoid the heat of the full sun. U.S. News & World Report (6/19)

No one ever told Linda Pegram not to leave her dogs in the car.

On a mid-80s day in April, Pegram cracked the windows for her 7-year-old Cocker Spaniel and 5-year-old Cockapoo as she shopped at a Walmart in Chester, Va. About an hour later, a passerby called police, who arrived to find the dogs dead inside the vehicle. Pegram, who was charged with two felony counts of animal cruelty, told local media outlets that she’s devastated and didn’t intentionally kill her animals.

It’s a grim reminder that, as the weather gets warmer, we need to pay extra attention to our pets. And keeping them inside vehicles on hot days isn’t the only health risk. U.S. News turned to veterinary experts who shared advice on how to keep our four-legged friends safe and healthy this summer:

Be careful with high-risk dogs. Animals cool by panting, and those that can’t breathe particularly well have the highest risk for health problems during the summer. This includes brachycephalic dogs, or those that have a short snout or are flat-faced – like bulldogs and pugs. Pay special attention to seniors and overweight pets, too. If your pet ever breathes in and out in a noisy way, he may have some trouble with airflow, which in turn means he may have a harder time cooling off.

[Read: How to Lose Weight With Your Pet.]

Don’t keep your pets in parked cars. Research from San Francisco State University suggests that in 10 minutes, the temperature inside a car rises by 19 degrees. Make it 20 minutes, and the temperature spikes by 29 degrees; 30 minutes and it goes up 34 degrees; and after an hour, the temperature soars by 43 degrees. Dogs and cats have a baseline body temperature of 100 to 102 degrees, and their organs begin to shut down at 106 degrees. “Very quickly, you can literally be threatening your animal’s life,” says Cathy Unruh, an animal welfare advocate based in Tampa Bay, Fla. She cautions that you should never put your pet inside a car that’s been parked outside in the blistering sun – the seats could be so hot that they burn your animal. Make sure the car is cooled down ahead of time.

Provide shade and water. Seems like a no-brainer, right? You’d be surprised, experts say. Always make sure your pets have ample shade and water when they’re outside. Kiddie pools and sprinklers are a smart idea, too, says Jessica Almeida, transfer director at the Humane Society of Utah. “A lot of the time, they’ll just go lie down in the kiddie pool and get their bellies wet,” she says. But never spray your dog down with a hose: Chances are, it’s been lying in the sun, and the water inside is scorching hot – enough so to seriously burn your pet.

Beware of heatstroke. It’s more common in dogs than cats and often arises when exercising in hot weather. Louise Murray, vice president of Bergh Memorial Animal Hospital in New York, suggests taking your dog out early in the morning or later in the evening, when the sun isn’t so high in the sky. Try to keep animals indoors between 10 a.m. and 4 p.m., which is typically the hottest part of the day. Symptoms of heatstroke include increased heart rate, excessive panting, increased salivation, a bright red tongue, red or pale gums, vomiting and diarrhea. “Just think – our pets are furrier than us, and they don’t process heat as well as we do,” Almeida says. “So if it’s too hot for you to be hanging outside, it’s probably too hot for your dog.”

Apply sunscreen. You’re not the only one who can get sunburned: Your pets can, too. Dogs are most likely to get sunburned on the bridge of their nose, in the groin area, on the tips of the ears and on their bellies, and animals with a thin coat are at particularly high risk. Invest in sunscreen that’s specifically designed for pets. Don’t share your own because some common ingredients, like zinc oxide, are toxic to animals, Murray says.