June 3, 2013 by The Animal Health Foundation 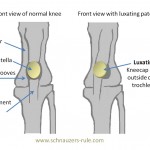 Luxating patella, a painful condition in which the kneecap slips out of position, is common in smaller-breed dogs but can also occur in larger dogs and cats, according to veterinarian Roger Grothaus. Four grades are used to evaluate the severity of the condition, notes Dr. Grothaus. Surgical repair is indicated for grades two through four, the most severe. Owners may not realize the knee is the source of their dog’s pain, but a veterinarian can make the diagnosis with a physical exam. “A lot of times an owner will come in and they will think it’s the dog’s hips that are bothering them, but it’s actually the knees,” Dr. Grothaus said. The Blade (Toledo, Ohio) (6/3)

Liz Dickens’ dog Winston is able to paint again thanks to a surgery he had on a faulty kneecap.

The sassy English toy spaniel enjoys creating watercolors with the help of his owner, but before he had his luxating patella repaired, he couldn’t even walk without crying out.

A luxating patella is a condition in which the groove the kneecap glides in is too shallow, causing frequent dislocation. It is a common congenital, developmental defect in small-breed dogs.

“He started to scream when he moved and would shake,” said Ms. Dickens of Toledo. “Now he is a brand new boy. He even greets me at the top of the stairs, which is something he had stopped doing.”

The 7-year-old dog, whom Ms. Dickens adopted from an animal shelter in California where she used to live, started acting strangely early this year.

“He would isolate himself, and I just thought he was just out of sorts, so I left him alone,” she said. “Then it got worse. If one of my other dogs brushed by him, he would scream.”

“With grade one, it can be managed with joint lubricants and anti-inflammatory drugs and weight reduction, but in Winston’s case, he definitely needed surgery,” Dr. Grothaus said.

Ms. Dickens could not afford the expensive procedure, but at the suggestion of friends and family, she started a chip-in page to raise funds. Within 24 hours, the popular dog — who has his own Facebook page — had received enough donations to pay for the surgery, which was performed Feb. 6.

One of his other kneecaps has the same defect but not to the same degree. Ms. Dickens is saving money for the second surgery.

Dr. Grothaus saw Winston every week for a month after the surgery and used laser therapy on the repaired knee to help it heal faster. Ms. Dickens also took Winston to the Toledo Pet Farm to use their hydrotherapy tub.

Luxating patellas can occur in larger dogs and even cats, Dr. Grothaus said. Diagnosis is made through palpation of the knee to see if it slips inside the joint more than would be expected, he said.

In grade one, the patella can be manually luxated but returns to the normal position when released, Dr. Grothaus said.

In grade two, the patella can be manually luxated, or it can occur spontaneously. The patella remains luxated, or dislocated, until it is manually put back in place by a human or when the animal extends the joint and moves the leg in the opposite direction of the luxation to restore it without help.

In grade three, the patella remains luxated most of the time but can be manually returned into place by a human, but the animal can’t do it itself. In grade four, the patella is permanently luxated and cannot be repositioned manually.

Grades two and higher require surgery, which typically runs $1,500 to $2,000. The repair is aimed at deepening the groove for the kneecap and correcting the misaligned kneecap mechanism, Dr. Grothaus said.

The condition is very painful and affected dogs will cry out in pain and hold the leg up. Over time, the chronic dislocation will lead to arthritic changes in the knee; loss of motion and pain are common problems, he said.

“A lot of times an owner will come in and they will think it’s the dog’s hips that are bothering them, but it’s actually the knees,” Dr. Grothaus said. “Knees are the most common injuries in canines in general.”

Now that Winston has had his knee surgery and recovered, he is back to painting again. Ms. Dickens puts the paint on a piece of paper, and Winston walks on it to create the artwork.

“He likes the treats he gets while painting, but he doesn’t like the bath afterward,” Ms. Dickens said. “He also likes to eat the yellow paint. Just the yellow.”

6 responses to “Luxating patella: A painful but treatable problem”