January 18, 2014 by The Animal Health Foundation 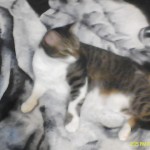 In December, 2012, Linda Leek was grooming her “best friend,” Sheba, a beautiful white and gray cat with streaks of brown, when she found a lump.

”When I touched it she would kind of flinch,” Linda said. “Every time I would touch her in that area she would not bite me but put her mouth on me like ‘if you do it I will bite you’ – a warning sign.”

Linda took Sheba to Beverly Virgil Animal Hospital, which is not far from her apartment in Los Angeles’ Koreatown.  Dr. Seong K. Kim examined Sheba and determined that she needed surgery. He performed the operation and spayed Sheba. Sheba was in the hospital two days. “He just took really good care of her,” Linda said. “The surgery had to be done. I found out later that the tumor was malignant.”

Linda, who has multiple sclerosis, lives on Social Security disability benefits and has little extra money to spend. A friend paid the cost of the initial office visit and Angel Fund and the hospital took care of the rest. Linda is grateful for the help she received.

Since her surgery, Sheba has resumed her role as Linda’s best friend.  The two expect to have many more years together. “She has her good days and her bad days,” Linda said, “just like me.” A couple of months ago, Sheba added another member to the household.

“Somebody in the building threw a kitten out in the street outside our apartment and Sheba went out and brought it in,”Linda said. “It was really surprising because it’s just been me and her for 12 years. And she didn’t allow other cats around. She went out and rescued that kitten and I’m like, ‘well o.k., I guess we have another cat.’”

The black and white kitten looks like Figaro, the kitten from Pinochio, and that is what Linda named him.