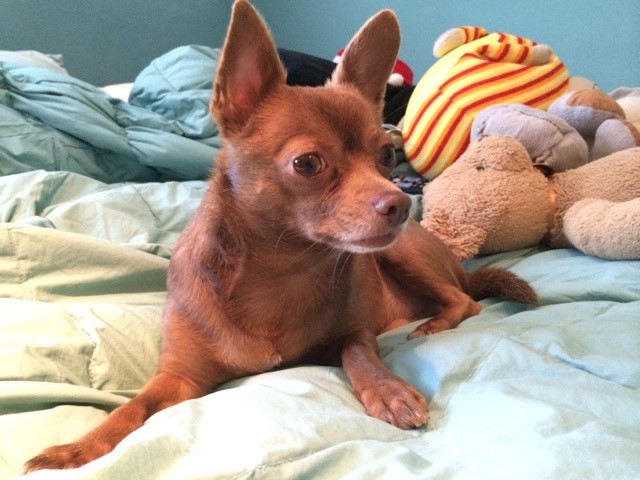 One day in December, 2013, an elderly woman brought her Chihuahua, Hershey into Laguna Hills Animal Hospital.  She tearfully told veterinary assistant Taryn Collins that she wanted to put the dog down.

“She didn’t think the medications that had been prescribed for him were giving him any relief from the allergies and anxiety we thought he had,” Taryn said. “ She felt that he was irritable at night and not able to sleep.  She was hysterical and said that he should be euthanized right now.  She thought that there was nothing else that she could do and she didn’t have a lot of funds. But she really loved her pet.

“I was the first one [at the hospital] to have contact with her and escorted her into the examination room so it was definitely personal for me. I decided that I was going to fight the idea of euthanizing. So I offered the suggestion that we take the pet,” she said.

“It turned out that Hershey had patella luxation – that’s where the kneecap can slip out of place – in both knees and he needed surgery. So he was licking and constantly going to his knees because they were painful, not because they were itching.”

The woman signed papers transferring Hershey to Taryn. “At the time, I didn’t know I was going to raise money to get him the surgery.  I just thought I would take him in and see what I could do for him. The woman was really grateful. She thought it was better than euthanizing him. I don’t think that in her heart she wanted him to die. She just couldn’t take care of him any more.”

Taryn set out to raise money for the surgery.  Clients of the hospital contributed $200 after they heard the story.  She contacted mobile surgeon Paul Cechner through Dr. Bernadine Cruz and “asked if he would do us a big favor. It was the holiday season and he did what is normally a $3,500 operation, I think, for $1,000.” Angel Fund contributed $500 and the hospital added more than $600. After the surgery, Taryn took Hershey home with her to recover.

She had good friends who had recently lost a Chihuahua because of heart issues and she asked them if they would like to take Hershey. “They’re like a second family to me. So when this little brown Chihuahua came in and the lady wanted to euthanize him, what is the irony that this family had just gotten their pet taken away from them? So I wanted to fix him up and get him ready to be fostered.”

And, after six rewarding years at Laguna Hills Hospital, Taryn was allergic to cats. “I wanted to learn everything and do everything and work with animals. But I just can’t work with cats. So I planned to drive to Pennsylvania to a new job in a physician’s office.

“Hershey was with me for the first month and then I left him with my friends and drove across the country.  And I got texts from them all the time telling me about him. They’re a big family and the dog is just loved, [although] he was shy at first. I’ve been told that I saved his life.  It’s def

And Taryn, too, is happy.  She is now helping people instead of animals and enjoying her new job.