December 19, 2015 by The Animal Health Foundation 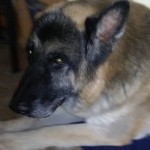 Yassmin Flores has a very special relationship with Junior, her German Shepherd.  “He is my baby, my little boy,” she said.  “I don’t have children and he’s like my child.”

So it was a shock in the summer of 2014, when she noticed a growth on one of his toes. It was not cancerous, Dr. Howard Brown at Pet Vet Animal Hospital in Canoga Park told her after a biopsy.  But it was a dangerous fungus that had grown quickly and needed to be removed quickly.

“It was in the bone and it was eating his toe,” Yassmin said. “You could see it growing.  You could see the bone. It just kept growing and growing.”

Yassmin took Junior to Dr. Brown within a week or two of the moment she first saw the fungus. “The funny part was,” she said, “ that a couple of weeks before I first noticed it, I had taken him in to get his toenails trimmed and there was nothing there.  They didn’t see anything.

“Dr. Brown said that we needed to take care of this quickly because it could just keep growing and spreading and it could go all the way to Junior’s leg and could mean eventually having to amputate his leg.”

Yassmin, who lives in Tarzana, works part time at an auction house and she could not afford the cost of the surgery to remove the affected toe. The staff at Pet Vet suggested that she apply to Angel Fund for help. She did and quickly qualified for assistance. Angel Fund and the hospital each contributed $500 toward the surgery bill.

“I thank them so much,” Yassmin said. “They’re wonderful and they’re awesome!  It’s nice that someone is there who cares so much [as Angel Fund does].”

Today, more than a year later, Junior is much as he was before, although Yassmin said that he is calmer than he used to be and seems to tire more easily.  “He doesn’t jump like he used to,” she said, “and you can tell that he sometimes has pain.  I give him doggy aspirin and that helps.”

Junior is now 11 years old and Yassmin is grateful to the staff at Pet Vet and to Angel Fund that he is healthy again.