April 8, 2016 by The Animal Health Foundation

On an August morning in 2014, Robin – a writer and editor who lives in West Los Angeles – heard a cat crying in her courtyard.  “He was yelping and he was really upset. He just kept crying and crying,” she said, “and his mouth looked swollen.”

Robin, who asked that her last name not be used, recognized Tarzan, a friendly cat who lived outdoors in the neighborhood after his owner died. eH “At first I thought he had an abscessed tooth. I could see he was in pain. . . . So I took him inside and started researching veterinarians on the internet.”

Robin took Tarzan to the Westchester Veterinary Center and Cat Clinic. “When I got there, I explained that I was not Tarzan’s owner and that I was just a concerned animal lover. The staff . . . was really friendly and concerned about the cat,” she said.

A staff veterinarian said Tarzan’s jaw was shattered and that he needed surgery. She said that he probably had been hit by a car.

“I sat inside the exam room with Tarzan and I was massaging him and talking to him and the [clinic] staff was talking about what to do.  Someone came in after a while and said that I could apply to Angel Fund for Tarzan’s surgery. I said I was willing to chip in $150. Angel Fund and the clinic paid the rest.” 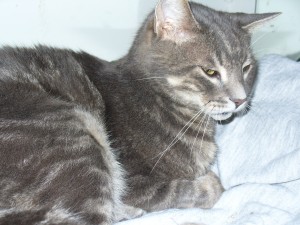 Dr. Henry Yoo, owner of the clinic, did the surgery. “He did an amazing job with Tarzan,” Robin said. “There were a couple of months of feeding him with a turkey baster and going to the clinic regularly for follow-up appointments. The people at the clinic were always friendly and helpful.”

The time she spent caring for Tarzan had an impact on Robin.  “After a couple of months,” she said, “I got very close to him. And I didn’t want him going back outside. It’s healthier for cats indoors [where they’re unlikely to pick up diseases] and there are no cat fights.  And I certainly didn’t want him to get hit by a car again. So I just had to adopt him.”

And, she said, “without Angel Fund, who knows what would have happened to him. He might have been put down. I really think that the clinic and Angel Fund saved his life.”

Today, she said, you can’t tell he had surgery. “He’s a special cat. He eats normally and has a good appetite. He has a lot of energy. He’s very clean and he was always really friendly. One day I woke up and he was lying there beside me.” She thinks Tarzan is “teen or pre-teen” in age.

Are she and Tarzan living happily ever after? “He is.  I am.”

Are you doing it together. “Exactly.”

One response to “Tarzan Recovers From Encounter With Car, Thanks to Angel Fund”