April 5, 2016 by The Animal Health Foundation 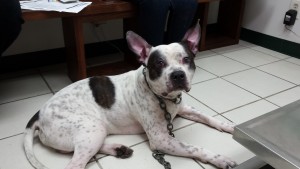 In November, 2014, the Montoya family’s dog Blue was having problems.  “He was showing signs for about a week,” Vera Montoya said.  “He lost his appetite and stopped eating.  I thought he might have eaten some of the kids’ Halloween candy. But then he didn’t eat for two days and he had a fever. Then he had a seizure. “

Mrs. Montoya, who was not working at the time, said that she didn’t have pet insurance and not much money to spend.  “I felt kind of helpless.  I didn’t want to take him to the hospital, knowing I didn’t have any way to pay for it.  I didn’t know then that there were places that offer people financial aid in those situations.”

But Blue, a pitbull, was shaking and feverish.  So she took him to an emergency hospital near her home in Santa Ana. “They took x-rays and found a small piece of metal that had punctured his intestine. And they told me that he needed emergency surgery.”

In the meantime, she had gotten a call from one of the other hospitals – Mesa West Pet Hospital in Costa Mesa. “They said that they could treat Blue. So we rushed right over there.  The doctor took him in to emergency surgery and she did what she could for him.  She found a piece of metal and we tried to figure out what it was.  After careful consideration, I think it was from a spiked collar we had bought for him but never used. It was hanging on a door knob and one of the spikes was missing. He loved to chew on anything he could get ahold of and we think he chewed on the collar and swallowed it.”

The hospital suggested seeking Angel Fund help. Vera filled out the forms and was granted nearly $500 in assistance. She is grateful for the help that gave Blue a chance to live.

The hospital did not have 24-hour staffing so Vera was told that she should take Blue home at night and bring him back in the morning. “The first night, we brought him home on a gurney because he was heavily medicated. . . . He woke up at 4 a.m. and I offered him some water but he didn’t want a drink. The next morning he seemed to have bounced back – very resilient. He seemed almost himself but he was weak. We took him to the clinic and he looked at me like he didn’t want me to leave him.  I was planning to pick him up and bring him home later that afternoon.

“But at 2 o’clock I got a call from the clinic. The doctor said: ‘He didn’t make it.’ She said he had had a seizure and didn’t survive.”

Today the Montoya family has another dog, a Rottweiler-pit bull mix. “We got the dog because my five children were so heart broken. We mourned for several weeks and it just seemed like we couldn’t get past it. We’d never had to deal with death before and it was so hard. I got the new dog to try to help us recover.  It’s still a very hard thing to discuss.

“Blue slept in my oldest daughter’s bed.  He was close with the entire family.  When I was pregnant with my two-year-old, he knew it and when I came home from the hospital, he was very welcoming of the baby.”

Vera now is employed in a medical office and her husband, Bladimir, works in maintenance and as a janitor. Their five children range in age from 2 to 20.

“In my culture we celebrate Day of the Dead,” Vera said. “So it was ironic that it was on November first [when Pulse initially contacted her]. And I thought it was really surprising because I was doing the best I could to remember Blue – all the wonderful things about him.”

2 responses to “Unable to Pay for Dog’s Surgery, Family Gets Help from Angel Fund”