January 7, 2017 by The Animal Health Foundation 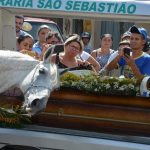 Wagner Lima, a 34-year-old Paraguayan cowboy, died on New Year’s Day 2017 in a motorcycle accident in Brazil. Everyone who knew Wagner knew what his dear horse Sereno meant to him, and vice versa.

Wagner and Sereno were best friends for many years.

Wagner’s brother Wando instantly knew that Sereno should be at the funeral, right alongside his human friends and family members.

“This horse was everything to him,” Wando told Globo News. “It was as if the horse knew what was happening and wanted to say goodbye.”

Wando led an emotional march to his brother’s final resting place in the city of Cajazeiras, Brazil. Sereno marched with them, but no one in the procession expected just how the grieving horse would react when he got close enough to Wagner’s casket to pinpoint Wagner’s scent.

Wando says he will now be taking care of Sereno in his brother’s honor.

Watch the video below to see what happened during this tear-jerking moment. No wonder this story is going viral so quickly!