February 23, 2017 by The Animal Health Foundation 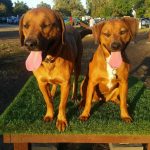 In October, 2015, Tamar Goldberg took Lily, her young shepard mix, for some exercise to a dog park near her Balboa Lake home in the San Fernando Valley. Lily was young – a little more than a year old. And she still had many of the instincts of a puppy.

Later, she was “eating a lot of grass and trying to throw up,” Tamar said. “She was unable to jump up on the sofa. She hadn’t pooped. Clearly, she was not acting right. I didn’t know what was wrong.”

So Tamar took Lily to VCA McClave Animal Hospital on Reseda Blvd. “The vet [Dr. Nada Khalaf] believed she had a blockage and tried a lot of things to treat her without surgery, which was going to be expensive. Nothing showed on her x-rays so we didn’t know what was causing it. After two days, she wasn’t any better and she wasn’t eating. So we decided to open her up.”

Dr. Khalaf found a rubber nose off a stuffed animal. “It looked like a pig snout. Lily swallowed it whole. When it got to the small intestine, it couldn’t pass. It was like a cork,” Tamar said. “Part of her intestine had started to die so Dr. Khalaf had to cut away the dead tissue before she sewed her back up.”

Lily healed quickly and today at the age of two she is a normal, healthy dog. “She is great. No problem,” Tamar said. “But we don’t go to the dog park any more. Now we do a lot of hiking.”

Tamar and husband, Darren, a transportation captain who coordinates drivers for shoots of television commercials, applied to Angel Fund for help when they knew that surgery was needed. “I had not been working and we were a little bit short,” Tamar said. “Angel Fund contributed $600 and so did the hospital and we took out a personal loan.”

She added that the hospital was very helpful. And, she said, ”for sure” the surgery saved Lily’s life. “If she hadn’t had the surgery, she wouldn’t have made it. There’s no question about that.”