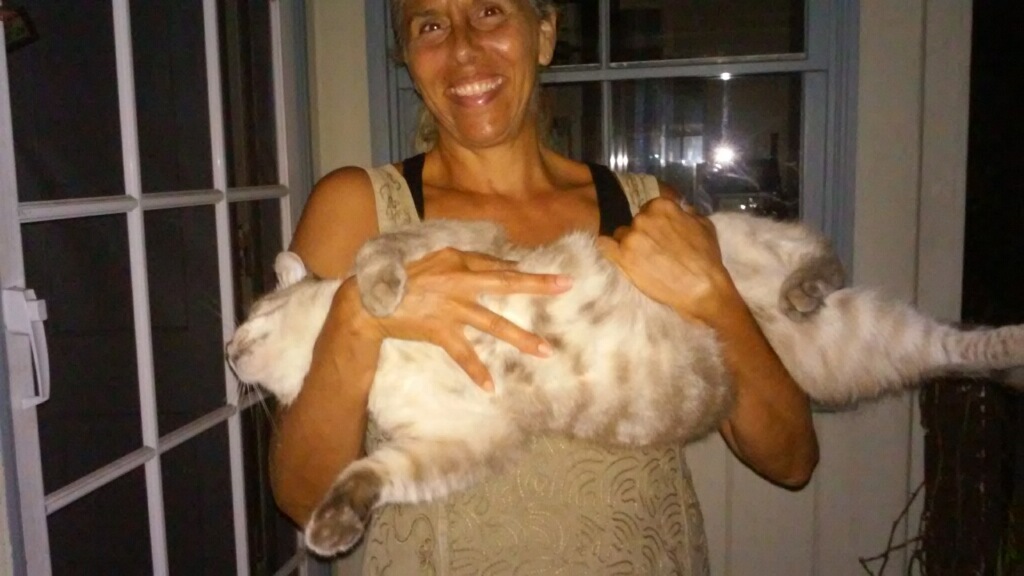 Baby Kitty – a beautiful Siamese cat – had “a few issues with eating and tummy problems” in 2016, owner Cherry Simkins recalled in an interview.  “I didn’t worry about it that much.”

But the two-year-old feline’s condition worsened.  And one day, Cherry could not find him, despite a long search of all his favorite haunts in the yard of her Torrance home.  By this time Baby Kitty had stopped eating entirely, she said, and she was worried.  Her veterinarian, Dr. Alice Villalobos of Pawspice and Animal Oncology in Hermosa Beach,  suggested that she search places “where you know he couldn’t be – every crack and crevice.” And she found him in a stack of wood that he had crawled inside.

“He realized that he couldn’t eat and he had crawled in there and decided that he would die there,” she said. “He was turning into a skeleton and his food was not being processed by his body.”

She took Baby Kitty to Dr. Edward M. Leeds at Surgical Group for Animals in Torrance, referred by Dr. Villalobos, who had diagnosed the cat with a diaphragmatic hernia.  Cherry thinks that the condition may have been the consequence of a fall.  Many of his abdominal organs had crowded into his chest cavity, impinging on his lungs and heart and threatening his life.

The Surgical Group performed corrective surgery and guided Cherry to Angel Fund, which provided a grant of $500.  The hospital contributed $1,938.  “It wasn’t something I could take care of,“ Cherry said. “I had had some really hard times financially.”

She was told that the likelihood was that her cat would not survive. But she said, “everyone was pulling for Baby Kitty. There was no doubt in my mind that he would pull through.”  He did.  And now, she said, “he is a much sweeter cat.  He’s the most loving cat.  It really shows how thankful he was that he was saved.  He’s really touched a lot of hearts and that makes him all the more special.”

Baby Kitty’s recovery was not without its problems.  He and his brother Poofa are outdoor cats and they want to keep it that way, Cherry said.  He hated being in a cage where he needed to be confined for a month, she said.  “He just went crazy.  It meant I couldn’t work like a needed to.  He needed a lot of love and care. I had to hold him and calm him and keep him settled because he wanted out.  Even wearing a cone, he figured out how to get out of that cage. He was able to lift the edge of it and slide out – and it was a heavy cage.  He flattened his body like a rat.  He didn’t want to be in there.”

Today, life is back to normal for Cherry and her two cats.  “They’re pretty spoiled,” she said.  “They have lots of places to go, here and at the neighbors, I’m sure.  They share a big lot with possums, raccoons, rats and the occasional coyote.

She doesn’t see coyotes as a problem for Baby Kitty and Poofa, who previously lost a leg to surgery.  “I have amazing crows here who love the cats. After the surgery, a coyote came to eat cats on my property. Believe it or not, the crows went insane.

“All of them descended on this area and I came out [wondering] what is all this ruckus? And they were telling me that the coyote was there, glaring at Baby Kitty and Baby Kitty was glaring back. I shooed the coyote off.  It happened one other time. And I came out and sure enough there was a coyote here again.  So the crows take care of the kitties and the kitties catch rats for them.”

She said that her cats are the welcoming committee for her clients who visit the office she built outside her house.  And, she said, “Babby Kitty loves to make me laugh.  He’s a funny creature and he has personality.  He loves to play tag.  He wants you to pet him and if you try to step away, he’ll reach around – without claws – and whack you, like you’ve got to pet him some more.  It’s a game.”

Her experience with Angel Fund, Cherry said, “has helped me to share with all my clients the benefits that are out there – the people, the loving way that they went about it, their generosity.”