October 31, 2019 by The Animal Health Foundation 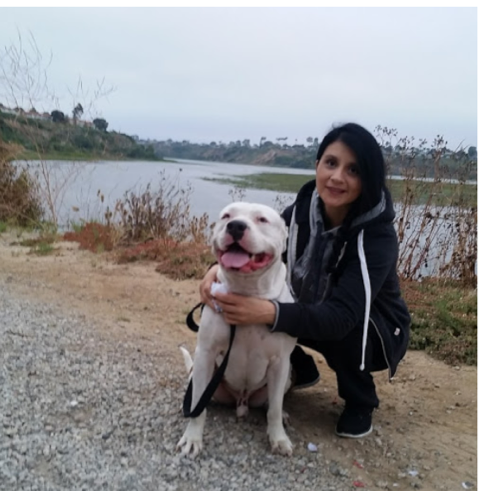 One day last October, Yolanda Magallanes, took Trojan, her four-year-old pit bull mix, to get some exercise in the park across the street from her Fountain Valley home as she frequently does.  All went well until it was time to go home.

When she went to bed that evening, Trojan did not come in to sleep with her. “He has done that since day one. He just wanted to lie on the tile floor.” He was lying in the same spot when she got up in the morning.

Before leaving for work, Yolanda called her sister, Irene Caudillo, and asked her to come get Trojan and take him to see her veterinarian, Dr. Mark Malo at Garden Grove Dog and Cat Hospital.  She met her sister there.  Dr. Malo did not have good news: He said that the dog was in bad shape and might be dying, she said.  He wanted to take x-rays and install an IV.

When Yolanda returned a couple of hours later, Dr. Malo said that the x-rays showed a large mass and that Trojan needed surgery.  He asked her to take the dog to a specialty hospital.

After what she described as a “royal” welcome for Trojan, the specialty hospital did an MRI and “put me in a room and said the doctor would be in soon to talk to me.”   When the doctor entered, Yolanda said, she was told that her dog had a large mass and needed surgery immediately.  There was a 65% chance that the mass was cancerous, the doctor said.

The doctor told her: “Your choice is either emergency surgery now or put him down.  If you’re keeping him alive, it’ll cost you $6,000 to $8.000 for the surgery.   And with the cancer treatments [that follow], you’ll continue to pay.”

She asked for a few minutes with family members, who were at the hospital “to figure this out.”  But the doctor told her, she said, that “we need a decision within the next few minutes.”  She felt pressured.

Yolanda began to sign the paperwork that would permit the hospital to euthanize her pet.  “But I just couldn’t go through with it,” she said.  Irene offered to lend her $4,000, the sum the hospital wanted before the surgery would be performed. After the credit card transaction, Trojan was taken into surgery.

Following the operation, Yolanda was told that the mass was not malignant and that her dog had suffered a ruptured spleen. Today, Trojan is a happy, healthy dog and Yolanda is “almost done paying the money, little by little, that I borrowed from my sister and from my bank.”

When she asked the specialty hospital about finding help for the surgery bill, they mentioned Angel Fund.  Yolanda called the fund and was impressed with how she was received.  “Angel Fund was very good to me,” she said.  “There was no waiting period and the lady I talked to was very nice and very polite.  She was great.”  She was granted $500.  After a call from Dr. Malo, she said, the specialty hospital reduced her bill by 10 percent, more than $800.  She also received a grant from another charitable group.

Yolanda did not see her relationship with the specialty hospital as one of trust.  “I didn’t feel that they were communicating with me,” she said.  The day after she took Trojan home, she took him back to see Dr. Malo.

She is a single mother who has raised two sons, 19-year-old Edward and Michael, 18, without help from their father.  Both still live at home.  She works for Advance America, a short-term loan company.

Tags:
Posted in: Angel Fund Grant Recipients | Dogs
Previous: What You Likely Don’t Know About Service Animals, but Should
Next: When Animals Mourn: Seeing That Grief Is Not Uniquely Human