January 16, 2020 by The Animal Health Foundation 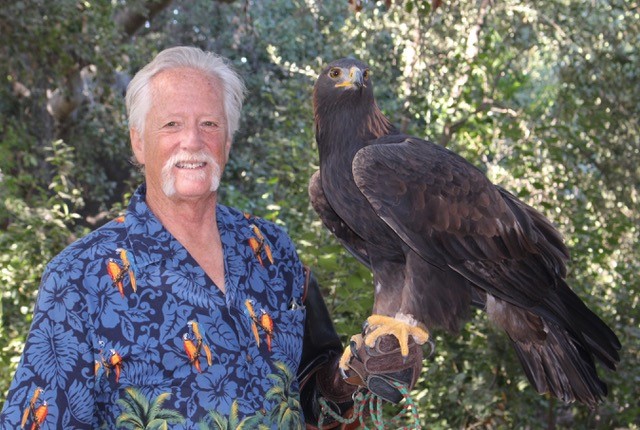 Dr. Weldy Has Devoted His Career to Exotic Animals

When Scott Weldy was a kid in Mission Viejo, he would go hiking in the hills, catching snakes, lizards and other animals and bringing them home.  “I’ve always been interested in exotics,” he said.

That is probably more true now than it was then.  Dr. Weldy owns Serrano Animal and Bird Hospital in Lake Forest and he spends much of his time treating exotics of all species in three zoos and at his practice.  He also is director of the Orange County Bird of Prey Center.

On February 1 at the SCVMA Annual Celebration he will be presented with the prestigious Cortese-Lippincott Award.  That will be a special moment for Dr. Weldy.  He knew both men for whom the award is named but Dr. Joe Cortese was a good and special friend. He had met Dr. Larry Lippincott but did not know him well.

“I really loved Joe,” he said in an interview.  “I was a technician when I first met him. It’s an honor to be up there [for this award], especially because of Joe.  He was such a gem to me.  He was a good doctor but he was a great guy, too.  If I could be half the person he was, I’d be in good shape.  My wife Marie and I really enjoyed his wife Goldee – both of them.  They were nice people.

“The only reason most people get recognized,” he said, “is because they’re surrounded by a team of people that keeps them honest and humbled.  I’ve got a good group of people around me.  We’re all part of a good team and they support me.”

Dr. Weldy moved his practice to a new facility last January, more than doubling its square footage.  Five doctors work in the facility, two of them part time.

“Tuesdays we do the Santa Ana Zoo all day and Thursdays we spend most of the day at the Orange County Zoo, then finish up in Santa Ana,” Dr. Weldy said.  “There are always two of us.

“We go to the Exotic Feline Breeding Compound in Rosamond near Palmdale as we’re needed.  Sometimes we stay overnight.  It’s a breeding center for endangered species.  They’re all exotic types: ocelots, leopards, jaguars.”  He is the veterinarian of record there.

Dr. Weldy took over the Bird of Prey Center in 1990.  Now that his new hospital is up and running, his major goal, he said, is to get the center up to par.  “That’s the last major goal of my career,” he said. “It’s a nonprofit organization.  I’m the medical director and director of the operation.  The center focuses on raptor education, rehabilitation and release.

“It’s a dream I’ve been working on since 1998.  We have a chunk of land that has some cages on it and a small building.  We’re slowly building up the cages.  It’s a temporary facility right now but we do educational programs.  The center is tucked in the back area of Rancho Las Lomas in Santiago Canyon.”

The new center is being built off El Toro Road behind O’Neill Park on land generously leased by Orange County Parks, he said.  Eventually, it will be able to provide medical and educational functions and will be the Bird of Prey Center’s permanent home, replacing the Rancho Las Lomas facility.

“We’re trying to get grants and public money.  We’re also wrapping up endowments and trying to raise money to accomplish our goals,” Dr. Weldy said.  The center rehabilitates injured hawks and owls and releases them.

“We don’t do small birds.  We work with wildlife biologists, the U.S. Geological Survey and people in mountain lion groups.  Most of the time when wildlife is brought into the practice it’s by Animal Control, and sometimes by good sam[aritan]s.”

Dr. Weldy loves the desert.  “I still go out and hunt reptiles and stuff like that,” he said, “but now I hunt them for photos.  I’m more of a desert person than anything.”

Her loves restoring old cars.  He has a 1961 Volvo that is fully restored and a 1969 Camaro that is nearly restored.  He also has a ’67 Camaro in waiting.  The Volvo is a special car.  It has been in his family since it came off the show room floor.  “My grandmother owned it then.  It later became my first car.”

He loves driving “muscle cars” – and his motorcycle, he said.  He is planning a motorcycle trip to “Bike Week” in Daytona, Fla., with friends in March.  “I have relatives and friends all the way across the southern United States so we’ll see part of the U.S. and spend a couple of weeks doing it,” he said.

Dr. Weldy came to Southern California in 1966.  He earned a BS degree in 1979 and a DVM degree in 1985, both from UC Davis.  He returned to Orange County and El Toro Animal Hospital, where he had worked as a teenager, after he became a doctor. He worked there 10 years before starting his practice in 1996.

The year 2019 has not been a good one for Dr. Weldy.  Wife Marie died of cancer last May – eight days after his mother died.   He has a daughter, Jennifer, 34, who is a registered veterinary technician.  She is teaching at Orange County Veterinary Assistant School in Garden Grove, where she had studied.  His son, Robert, 30, does research work in human neurology.

Besides cars and motorcycles, Dr. Weldy loves travel and scuba diving.  “Almost everything I do is related to animals,” he said.  “There has got to be an animal in it somewhere.”

The Animal Health Foundation’s Cortese – Lippincott Award was created to recognize and honor an individual who has gone above and beyond in making the world a better place for both animals and humans.  The winner of this award has gone above and beyond in community service, service and education of the veterinary community and the human-animal bond.

The award was named in honor of veterinarians Larry Lippincott and Joe Cortese.

Tags:
Posted in: Human-Animal Bond
Previous: Veterinary euthanasia: the last act of love
Next: Cold Weather Can Kill Your Pet — Follow These Tips