March 6, 2020 by The Animal Health Foundation 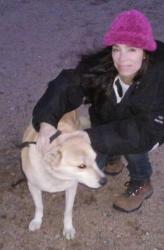 Late one Monday afternoon in December, 2016, Scott Rosenthal and his wife Christina, patted their dog Cody and left their Lancaster home for a Bible study class at their church in Woodland Hills.

When they returned later that evening, Cody “came walking up to me,” Scott said, “but she couldn’t put any weight on her right front foot.  It was just flopping around and I was like, ‘Oh oh!’”

Cody loved to chase rabbits but it didn’t look like she had gotten out of the Rosenthal’s 1.6-acre yard.  Scott thought she may have stepped in a gopher hole.  The dog is a beautiful Labrador mix and she was in a lot of pain.   “She laid down and I couldn’t get her up,” Scott said.  “She’s not that big, about 50 pounds.  I had to get a blanket and roll her onto it to move her.”

Scott called Dr. Wendy Brooks, who owns Mar Vista Animal Medical Center.  She is an old family friend and Scott has always taken his animals to her – even though it is more than an hour’s drive away.  Because of his work schedule, he was unable to take Cody to the hospital the next day.  “Once I got her there, they made her comfortable and they [examined her] and decided what they needed to do,” he said.

Dr. Brooks determined that Cody needed a titanium bone plate for her fractured radius.  Scott, who works as a mechanic on the vehicle fleet at Oaks Christian Camp and Conference Center, “was a little low on cash” at the time, he said, and he was fearful that he might have to put Cody down.

But he called Care Credit and obtained a loan.  And the staff at the hospital suggested applying to Angel Fund.  He did and was granted $500, a sum matched by the hospital, which also provided $350 from client donations.

The surgery cost $1,800 but the hospital boarded Cody for about three months.  Scott’s total cost, he said, was $440. “There was care at the hospital and some of that was donated,” he said. “And I worked on one of their vehicles and that was bartered.”

And, he said, his neighbors, Don and Paul Eaton – Don was a special friend of Cody – gave him $350 to help pay the dog’s medical bills.  “He put the money in my hand and he said, ‘We’ll put it toward that.’  And I was like, ‘You’re kidding me!’ He’s a brother in Christ and he realized there was a need,” Scott said.   “It all worked out.  It was an amazing blessing.”  He and Christina are grateful to Angel Fund, the hospital and the Eaton brothers.  “There’s God all over this thing,” Scott said.

Today, Cody is doing well at 11 years of age.  For the first six months after her surgery, Dr. Brooks was concerned “because the operation didn’t quite take,” Scott said, and because of the possibility of infection.  But those concerns now are long gone.

“Cody has settled down a little bit and is not so active as she once was,” he said.  “The leg isn’t as strong as it was but she uses it just fine.  She wants to jump around like a puppy so we have to keep an eye on her.”

Tags:
Posted in: Angel Fund Grant Recipients
Previous: The Dos and Don’ts of Crate Training
Next: A Kiss Changes Everything