December 22, 2021 by The Animal Health Foundation 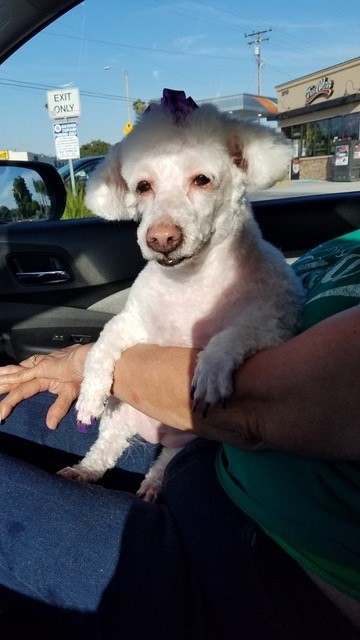 Late last fall, Maria Barraza noticed a lump on her dog’s right hip.  “Blanca had an infection and I started feeling around and felt the lump.  So I took her to a local veterinarian in Baldwin Park where I live,” she said.

“The doctor checked her and told me it looked like she had a tumor and that it might be cancer.  That scared me.  They gave me antibiotics for her infection and we got rid of it.  But the doctor told me that her clinic didn’t do surgeries and that she would have to refer me to another hospital.”

The referral was to a hospital in North Hollywood, Maria said.  The staff there treated her rudely, she said, and frightened Blanca, who ran out into a busy street.   “That scared me,” she remembered. “I wasn’t happy and I wanted to take her somewhere else.”

One of the doctors she had seen told Maria about Huntington Pet Vet and Wellness Center in Huntington Beach and suggested she might be able to get help with her bill there.  On the way to Huntington Beach, she noticed another lump on Blanca’s chest.  When she arrived at the hospital, she told the staff member who picked the dog up at curbside to take her into the hospital about the new lump she had noticed.

Dr. Allison Naito examined Blanca and told her that Blanca, a poddle, was overweight and confirmed there were fatty lumps that should be removed.  “But when I picked her up, I didn’t notice any stitches on her hip.  When I called to ask about it, they told me that they had to take two lumps off her chest and that I should keep her on a diet and bring her in if the lump on her hip gets bigger.”

Dr. Naito recommended Angel Fund when  Maria told her that’s she would need help to pay for the surgery.  “I’m on a budget,” Maria said.  “I was afraid of what the cost might be if Blanca had cancer.  I was really depressed about it.”

The hospital staff helped her fill out the Angel Fund forms.  She received a grant that was matched by the hospital, for which she was very grateful.  She was also relieved when she was told that there was no cancer.

Blanca was one of a series of poddles Maria has owned, nearly all living until about age 16.  “Three years ago, I had to put down Selena, my older dog, who was a black poddle, and it very hurting for me.  I did not want to have to do that with Blanca when she was only 10 years old.”

Blanca is doing well now.  She has recovered nicely from her surgery last December and Maria is careful about what she eats.  “I avoid giving her fatty foods and snacks. She is eating better and seems to have more energy.  I can’t walk her much because I have a bad back but I have a big backyard and she loves to run there.  And my caretaker does take her for walks.”

She also said that the fatty tumor on Blanca’s hip is smaller now and she is now optimistic that her dog will make it to 16.  She is grateful to Angel Fund and the hospital for the help they provided.

Tags:
Posted in: The Animal Health Foundation News and Events
Previous: Two mountain lion kittens survived after wrenching Thousand Oaks rescue.
Next: How to Help a Friend Who Is Grieving the Loss of a Pet