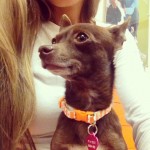 In June, 2013, Rebecca Martinez noticed a small dog running in the middle of the street near her Glendora home. “I tried to get her for a day and a half and I finally got two of my girl friends to come over and we were able to catch her,” she said in an interview.

“We took her to a local animal shelter. And we posted pictures of her and tried to find her owner. After a few days, the people at the shelter said it would be best if we took her home because she had a heart condition. If we had left her there, they would have had to put her to sleep. So we took her home.”

And, she said, “we tried to adopt her out but nobody wanted her with that [heart] issue. So we took her to a few different veterinarians and then we took her to a cardiologist to see exactly what was wrong. It’s been a long road.”

Through all this, the dog the family named Peatree was stealing the hearts of Rebecca, husband Jose and their two children. “Oh, yeah, I was attached to her already,” Rebecca said, “I just didn’t want to admit it.” The five-pound Chihuahua mix was one to three years old at the time, veterinarians said.

“I’m always picking up animals and I never had a problem finding an owner or being able to help a dog get adopted out,” Rebecca said. “And this was the only one I’ve ever been stuck with. And we love her to death! She came to us for a reason. She knew we weren’t going to let anything bad happen to her.”

There were a couple of surprises in store, however. “When we picked her up, we didn’t know that she was pregnant. So we couldn’t do the surgery she needed for her heart. And there was another catch: when she had x-rays to see how many puppies there were – the veterinarian could only see two but there were three – she had a shattered pelvic bone, either from being kicked or hit or some traumatic injury and she could not have a natural puppy birth. She would have to have a C-section.”

Peatree had a congenital heart defect, left-to-right shunting PDA, but Rebecca and Jose, who works for a wire money transfer firm, have not been able to afford the surgery. The cost was $5,000, she was told. But Peatree is now four or five years old and is doing well. Two of her puppies are part of the family and the third one lives next door. “They’re all healthy and happy,” Rebecca said.

She was told about Angel Fund by a friend of a friend, who runs an animal rescue center. “We maxed out two credit cards just for having the C-section and the after care,” Rebecca said.

Angel Fund and Advanced Veterinary Care Center in Lawndale, where the Martinez family had taken Peatree to see a cardiologist, each contributed $500 to help defray the mounting costs.

“The foundation was so helpful,” Rebecca recalled. If we hadn’t had that help, we wouldn’t have been able to make the right choice for Peatree. I am so appreciative.”