February 5, 2015 by The Animal Health Foundation 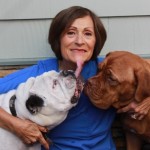 Below is the article that appeared in the SCVMA monthly publication “Pulse”.

From the moment she graduated from the UC Davis School of Veterinary Medicine in 1972, Dr. Alice Villalobos was a veterinarian with a special pedigree.

She was one of the profession’s first oncologists. She had, in fact, unofficially done a three-year residency in veterinary oncology while she was completing her studies at Davis. “When I went to my first lecture about the cancer cell, I was very inspired,” she recalled in an interview. “I felt it was something I could do [that was] worthy of devoting my entire career to. And that is to kill the biggest pest in the body, which is the cancer cell.”

Student Villalobos worked for Dr. Gordon Theilen, a cancer research specialist widely regarded as the father of veterinary clinical oncology, who designed a three-year residency program for Davis that she was the first to complete. That oncology training and mentorship have served her well. Today she is regarded as a pioneer in the field, has written a textbook on the subject and is in wide demand as a speaker.

After receiving her DVM degree, Dr. Villalobos returned to the Los Angeles area where she grew up and worked as an associate in Manhattan Beach. In 1974, she opened the Coast Pet Clinic/Animal Cancer Center in Hermosa Beach, which developed into the first multidisciplinary private oncology and radiation therapy referral service in the United States. She also worked 10 years as a research affiliate in radiation therapy at UCLA’s Rilger Center.

“When I got out of vet school, I never knew that I was going to be a leader in veterinary oncology. It became a rapidly growing specialty and board certification was established in the mid ’80s but we already had a radiation oncology practice with three oncologists, internists and a surgeon. Many people called us Davis south.”

In 1999, Dr. Villalobos sold her clinic to VCA. Today she operates a Tuesday clinic at VCA Coast in Hermosa Beach called Pawspice (it rhymes with hospice). It “embraces treating advanced disease using kinder, gentler approaches that do not compromise the patient, expert pain control and immuno-nutrition that helps patient well being,” she said. “We try to have pets at home with their families. The whole idea is that the patient feels comfortable at home and the family members have privacy. We prioritize pain control and quality of life big time.”

Her team also runs a busy Wednesday clinic at ACCESS in Woodland Hills called Animal Oncology Consultation Service & Pawspice. This schedule allows time for writing, speaking at national and international meetings and participation in organizations dear to her heart. Her textbook, “Canine and Feline Geriatric Oncology: Honoring the Human-Animal Bond,” was published in 2007. She has written two monthly columns for Veterinary Practice News and now writes occasional columns under the title, “Dr. Alice at Large.”

Dr. Villalobos comes from the “cement society.” She grew up in the Crenshaw District near the Forum in Inglewood. Her parents immigrated to Los Angeles from Mexico as children. “My parents considered education very important,” she said. “I was the first one [the fourth of five siblings] to go away to college.” Her father worked in a factory and her mother worked as a seamstress. “We got by just fine but we didn’t have a lot of money,” she said. “Jobs and student loans helped me pay for college.”

Young Alice went to St. Mary’s Academy and attended El Camino College and Long Beach State. She transferred to UC Davis as a senior, then won acceptance to veterinary school.

As a child, she said, “I always loved animals. I collected bugs in the back yard. I wanted to have a dog but we couldn’t have one. A stray came into our yard when I was in second grade and he was scratching all the time. I wanted to help him. We took him to the vet. He took a skin scraping and showed me a terrible creature under the microscope – a sarcoptic mange mite. I’ll never forget that ugly creature. I asked the doctor how much it would cost to fix the dog. The doctor took off his glasses and he looked at me and he said, ‘30 dollars.’ I knew right then that I was going to be a veterinarian and take care of my own pets.”

Today, she said, she likes to show clients cancer cells under the microscope. “I think it really means something to them.”

Her goal is to “create a movement throughout the United States and the world to increase the awareness of all practices, whether general or specialties, to the concept of hospice or Pawspice so that pets can spend their last days on comfort care at home with their families – and not in the hospital. We were trained to not send an animal home that can’t move. But now we’re asking emergency room doctors and clinicians to rethink and send patients home for hospice. People prefer a little more time at home to say goodbye to their pets with help from a house-call doctor or their local veterinarian.”

In 2004, Dr. Villalobos put together her Quality of Life Scale. In wide use today by veterinarians and pet owners, it “helps people make the decision to continue hospice to improve the patient’s quality of life or to make the final call for euthanasia so that we can assure a peaceful and painless passing.”

Dr. Villalobos has a protocol for euthanasia that is “very gentle and kind.” She wants family members to feel comfortable and unrushed and, she said, she never separates the pet from the family. She sedates the pet first so that the pet falls asleep with loved ones nearby. Family members who feel uncomfortable can leave the room before euthanasia. She wants it to “be a peaceful experience for all . . . and a memorable experience” even though it is a difficult time.

On January 31, Dr. Villalobos was presented the H. Don Mahan award at SCVMA’s annual Celebration and Installation of Officers. The association’s most prestigious award goes annually to a person who has served organized veterinary medicine in an extraordinary manner.

Dr. Villalobos and Ira Lifland, her husband of 32 years, are “the American mom and dad” to three Asian families. They are guardians and god parents of 16-year-old Cindy Zhou, who has lived in their home in Hermosa BeacherHHH eermosa BeachHfor two and a half years.

In 1977, Dr. Villalobos founded the Peter Zippi Fund, which has helped more than 14,700 homeless animals. The recipient of numerous honors, she was named Bustad Companion Animal Veterinarian of the Year in 1999, received a UC Davis Alumni Achievement Award in 1994 and won the CVMA’s Distinguished Service Award in 2014. She has held many leadership positions and has served as president of the Society for Veterinary Medical Ethics, the American Association of Human-Animal Bond Veterinarians and the Sierra Veterinary Medical Association. She is veterinary chair for the National Academies of Practice and is a director of the Animal Health Foundation.

She stays fit by jogging and skiing. She also loves dog walking, community work and travel.