October 24, 2015 by The Animal Health Foundation 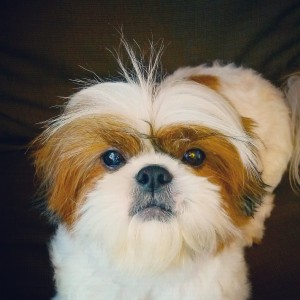 One morning late in January, 2013, Nichole Castaneda, was on her way to work.  She heard a dog barking across the street. It was a small dog – a Shih Tzu – and it was alone.  Nichole called to the dog and it ran across the street.

“It almost got hit by a car,” she said. ”I was wearing a sweater with a drawstring so I took out the drawstring and tied it around the dog.  Then I took it to the 7-11 that is next to my work” at a Weinerschnitzel fast food restaurant.  She asked a clerk at the 7-11 if she knew the owner of the dog.  The answer was no.  But the clerk said that a coworker might want to take in the animal. The coworker took it home.  But the dog’s barking annoyed his neighbors.  The next day, the dog was returned to Nichole at the Weinerschnitzel.  She put the dog in a shopping cart with a bowl of water and placed cardboard over the top.

“When I got off work, I took her home. She was urinating blood so I took her to an animal hospital.  They took x-rays.  She had no microchip. She had two ear infections. She had a bladder infection and three big bladder stones. She needed antibiotics and ear medication and they set up an appointment to do surgery for the bladder stones.”

By this time, Nichole and the dog – she named it Sally after a character in the movie, “The Nightmare Before Christmas” – had become fond companions. The surgery would cost more than $5,000, Nichole was told, far more than she could afford on her modest income.

“What I did was I went online to Giveforward.com and set up an account where people could donate money toward Sally’s surgery,” she said.  She also posted an account of Sally’s adventures on her Facebook page.  Both brought contributions.  She also found Angel Fund online and submitted an application, which was approved.

“Angel Fund was awesome,” Nichole said.  “I really appreciated their help – a lot. And the same with the hospital and the Giveforward people. And everyone else who helped.” The surgery was performed at Veterinary Healthcare Center in Monterey Park in December, 2013. Angel Fund and the hospital each contributed $500.

And the Shih Tzu gets lots of tender, loving care from Nichole and her 14-year-old daughter, Mary Lou. They live with Nichole’s dad and his second family in Rosemead. There are three other dogs, two cats and several children in the household – a great home for a friendly dog like Sally.