December 2, 2014 by The Animal Health Foundation 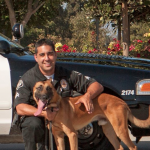 Prinz, one of La Habra’s two police dogs, will soon be much safer while on duty, thanks to a new ballistic vest that will protect him from potential stabbings or bullet wounds.

The vest, valued at $950, was awarded to Prinz by the Massachusetts-based nonprofit Vested Interest in K9s Inc. and the Animal Health Foundation, a charitable organization located in Lake Forest.

“Prinz is just like a member of my family,” said his handler, La Habra Police Cpl. Nick Baclit. “I’m thankful that he will now be safer, when he is deployed in dangerous situations.”

Prinz is part of two K-9 teams at the La Habra Police Department. Each team is comprised of an officer and a police dog assigned to the patrol division where they are deployed to conduct area, perimeter, and building searches.

These highly trained dogs assist the officers in performing their duties in a safe manner, by alerting on the areas where suspects have concealed themselves in an attempt to evade capture.

Recently, there have been several high-profile cases where police dogs have been shot in the line of duty. The most famous is the Anaheim K-9, Bruno, who was shot and injured last March.

And on Sunday, Reiko, a police dog with the West Covina police force, was shot and injured during a standoff with a gunman. Bruno has since fully recovered and Reiko is expected to do the same.

The nonprofit Vested Interest in K9s was established in 2009 to assist law enforcement agencies with providing this potentially life-saving body armor for their four-legged officers.

Through private and corporate sponsorships, Vested Interest in K9s, Inc. has, since 2009, provided more than 1,125 law enforcement dogs in 40 states with protective vests at a cost of more than $1 million.

The Animal Health Foundation is committed to improving the health and welfare of animals by supporting and promoting charitable, scientific, literary and educational activities.