December 30, 2014 by The Animal Health Foundation 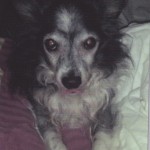 Loucinda Carter described him as a “big little dog” the first time she saw the Chihuahua who would spend nearly 18 years as her companion animal.  “I named him Nui,” she said, because that is the Hawaiian word for big and I had just come back from Hawaii. He was really big [compared to his litter mates] but he was little. He was nui, nui.”

Nui, she said went everywhere with her.  “I’m disabled and he was my companion dog. He did everything with me, including going to the cancer treatment center at Cedars Sinai Hospital” in Los Angeles. (She lives in Dana Point.) “He was right there with me the whole time. He was my family. He was everything. I am a nurse but unfortunately am not able to work.”

And, she said, Nui never was trained to do tasks that would assist her – but he learned to help her anyway.  “My bones are all messed up from having to take steroids and I would reach into a drawer to try to get my things and he would see that I wasn’t able to pull something out – my arm won’t stretch out all the way – and he would jump in the drawer and grab something and bring it to me.  And then he’d jump in and grab the next thing.  And he’d jump up on tables and bring me things I couldn’t reach. He was so in tune with me.”

Nui and Loucinda lived together and loved each other for more than a decade and a half and then Nui got sick.  Loucinda had him treated and he recovered but she exhausted her limited resources to pay his bills.  When he fell ill a second time in March, 2013, she had little money to pay for his care. “I knew I wasn’t going to be able to do it,” she said.  “It was really hard.”

Nui wasn’t eating right, she said, and he was sluggish and lethargic.  He also was shaking and having tremors.  She took him in the middle of the night to an emergency clinic, then to Laguna Beach Animal Hospital. He was treated for a kidney problem with antibiotics and a special diet.

“I prayed a whole lot and he did seem to get a lot better,” she said. “But the veterinarian (Dr. Jim Levin) said that he did not expect him to live much longer. I was hoping he’d be the longest living Chihuahua ever.”

Nui lived for the better part of a year – time that Loucinda cherished. She is grateful to Angel Fund and the staff at Laguna Beach Hospital for giving Nui that time.

Now she is thinking about getting another dog but, she said, “You never really can replace that one who’s been so special.”