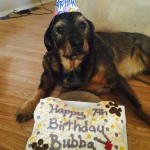 In January last year, Brandy Knochel took her dogs to Riverwalk Dog Park in Riverside not far from her Perris home. “It’s a dog park I frequent and we were on the agility side of the park,” she said. “There’s a hoop you can jump through and Ollie loves to do that.”

Ollie is a Rottweiler-Airedale mix who weighs more than 100 pounds. “Bubba, go jump!” Brandy told him. The dog eagerly ran for the hoop but his sister, a much smaller Golden Retriever mix, got in the way. “She jumped in before him, which slowed him down. So when he jumped through, his back leg got hung up on a chain,” she said. “And when he landed, he immediately laid down and started yelping. I thought, ‘Oh my god, he just broke his leg.’ He couldn’t walk and he wouldn’t let his toe touch the ground. So I took him to the veterinarian.” The doctor said she believed Ollie had ruptured his anterior cruciate ligament. She referred Brandy to a specialist.

A dog trainer, Brandy said she was “immediately doing fund-raising for him. I did training at discounted rates. I did rummage sales. I did garage sales. I knew he was going to get surgery but, if we could get help, it made it that much easier.” At her garage sale, she put Ollie in her front yard on an ottoman with a document that described what had happened. “We told people that all proceeds would go for his surgery. We had people who came to the sale and didn’t buy anything but donated to his surgery fund.”

A friend who lives nearby and works for SCVMA told her about Angel Fund. Brandy filled out an application. Shortly before Ollie’s surgery date, her friend called her and told her that her application had been approved.

Dr. Sam Shenouda performed the surgery on Ollie at Ambassador Dog and Cat Hospital in Long Beach. When he repaired the ACL, however, he discovered a torn meniscus and repaired that, too. The additional cost was $900.

“I had raised enough for his ACL surgery,” Brandy said. But with the additional charge for meniscus repair, she needed the Angel Fund grant and the hospital’s match to pay her bill. “When I found out they had approved it, I said, ‘Holy Cow! I cannot believe this is happening.’ I was very thankful for it. I’m sure he [Ollie] was, too.”

Ollie now is “a brand new dog, essentially,” Brandy said. “He looks so good. And the doctors said that, usually, if a dog tears a leg on one side, he is at risk for the other side. We’ve had zero issues with his other side. You wouldn’t know looking at him that he had had surgery. HJ He takes a little longer to get up, especially in the winter, if he’s been lying down a while, because he has to stretch the [injured] leg.

“We’re very, very much appreciative of the help Angel Fund gave us. It relieved some of the tension and it just made this a whole thing a lot easier. It worked out extremely well for us.”