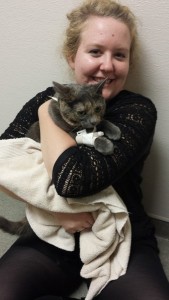 About three years ago, Julie Waters found a young female cat she named Sabrina alone in a parking lot. “She was a stray and she was tiny,” Julie recalled. “But ever since she came into my house – she was just a couple of months old – she has been in charge. I have another cat and big dog but Sabrina is the boss.”

In December, 2014, more than a year after finding the kitten, Julie noticed that the usually high energy Sabrina was lethargic. “She wasn’t interacting with the other pets. She was just laying around a lot. I thought maybe she was sick but I didn’t think it was anything serious.  One of my friends saw her after a week and she said, ‘She doesn’t look good. You should take her to the vet.’ I was thinking the same thing. Sabrina wasn’t getting any better. So I took her in and it was like, oh no, this is really bad!”

Julie took her cat to Redwood Animal Hospital in Redondo Beach not far from her home.  Dr. Veronica Pirotto examined Sabrina and found “a mass of some sort. Sabrina was very uncomfortable when she was touched in the abdomen.  Two days later, they did exploratory surgery. They called me while she was still on the table and said that they needed to send her to a specialist. She was going septic. All the tissue around her organs was infected and there was some leakage into her kidney. If she doesn’t have surgery to remove the infected tissue she is going to die of kidney failure, the doctor said.”

Julie took Sabrina home with medications to keep the infection at bay and made an appointment with Dr. Mary Somerville at Animal Specialty and Emergency Center, also in Redondo Beach.

Dr. Somerville performed surgery to remove the infected tissue. “But she called me and said that Sabrina needed a second surgery to removed one of her kidneys. Dr. Somerville quoted me a price of $3,500 for the first surgery and the hospital stay. And with the second surgery and longer stay, it was going to more like $5,500. But she honored the original quote. She was really wonderful.”

At the time, Julie had just earned a graduate degree at Cal State Dominguez Hills and had begun the 3,000 hours of practical work needed to qualify for a license as a marriage and family counselor. She is self supporting and had little income. She did not know how she could pay for the surgery. “It was very scary,” she said. “My cat was just a year and a half old. She is not supposed to be dying of kidney failure. And I was like, I can’t afford this [second surgery].  I could barely afford the exploratory surgery.”

The doctors and staff at Redwood told Julie about Angel Fund and helped her apply. They also told her about other foundations that might help.  And, she said, they provided her with free services.  “I am very thankful to them and to Angel Fund because that whole time was so stressful. My grandmother passed away in surgery a week before Sabrina had her surgery and that whole time just feels like a blur.” Julie now has her counseling license and is launched on her career.

And Sabrina still runs the house. “She has so much energy,” Julie said. “She is totally the boss of the house again. . . . She is a hussy.  That’s what she is.”