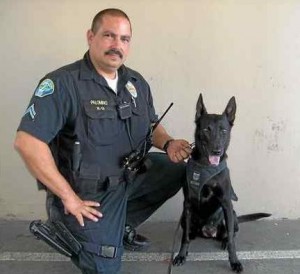 If you live in Southern California, you probably remember the story about the Monterey Park K-9 Officer Robin being stung by bees while helping to apprehend a suspect.

Thousands of people were praying that the beautiful black shepherd would survive the bee attack.  And, he did.

Officer Robin’s handler, Peter Palomino, wanted to protect his partner in other ways as well and put in a request to receive a bullet-proof vest for Robin.

The Animal Health Foundation who had partnered with another local police department to donate a vest was contacted by Vested Interest and donated a custom-made vest for K-9 Officer Robin.

On June 26, 2015, the Monterey Park Police Department’s K9 Robin was awarded a ballistic vest thanks to nonprofit organizations Vested Interest in K9s, Inc. and the Animal Health Foundation of Lake Forest, CA who provided $950 for the vest. The vest will be embroidered with the sentiment “This gift of protection provided by the Animal Health Foundation.” This is the second vest to be awarded to a Monterey Park K9 this year since K9 Veeda in May.

Vested Interest in K9s, Inc. is a 501c (3) charity located in East Taunton, MA. whose mission is to provide bullet and stab protective vests and other assistance to dogs of law enforcement and related agencies throughout the United States. Each vest costs $950 and has a five year warranty. The nonprofit was established in 2009 to assist law enforcement agencies with this potentially lifesaving body armor for their four legged K9 Officers. Through private and corporate sponsorships, Vested Interest in K9s, Inc. provided over 1,395 law enforcement canines in 49 states with protective vests since 2009 at a cost of over $1.3 million.

The organization orders the U.S. made vests exclusively from distributor Regency Police Supply in Hyannis, MA. who also does the custom embroidery on the body armor. Vests are manufactured by Armor Express in Central Lake, MI.

New K9 graduates as well as K9s with expired vests are eligible to participate. The program is open to law enforcement dogs who are U.S. employed, certified and at least 19 months of age.

Vested Interest in K9s provides protective vests for $950 and offers a five-year warranty. Vests provide the law enforcement canines some protection from bullets, knife attacks and other dangers.

Robin’s vest will be embroidered with the sentiment “This gift of protection provided by the Animal Health Foundation.”

This is the second such piece to be awarded to a Monterey Park K9 this year. K9 Veeda received one in May.