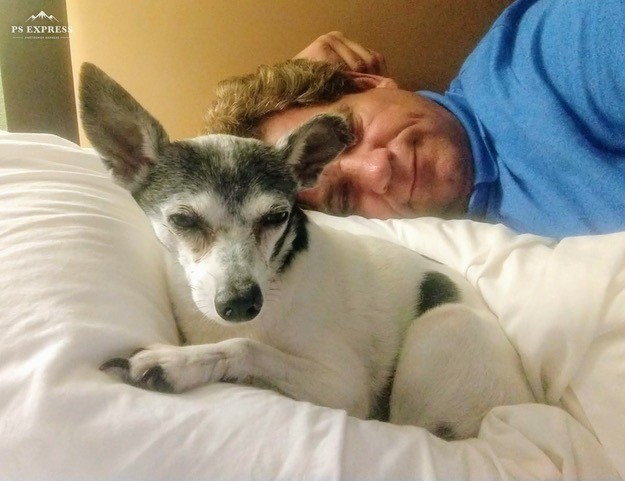 Tyler Davis and Spritzer, his 13-year-old Toy Fox Terrier, had been through a lot together.  “He was just as spry as he could be,” Tyler said.  But then the seven-pound dog started having problems.

Tyler took him to Fairview Pet Hospital in Costa Mesa.  Dr. Hongwon Kang told him that he believed Spritzer had a congenital condition that is common in the breed.  He said that he needed an x-ray to confirm the diagnosis.

But Tyler, who recently had been homeless, did not have the money to pay the bill.  The doctor suggested that Angel Fund could help.  Tyler applied but it was about three weeks before he received the grant.  In the meantime, Spritzer’s condition worsened.

Tyler did research online and knew what medications were recommended for treatment.  The condition includes a collapsed trachea and an enlarged heart.  “It makes it increasingly hard for the dog to breath,” Tyler said. But Dr. Kang did not want to prescribe the drugs, he said, until he could take x-rays to confirm the condition.

When Tyler was informed that his grant had been approved, he was ecstatic.  He took Spritzer to the hospital and x-rays were taken.  Tyler obtained the medications and began giving them to his dog.

“Angel Fund was a life-saver but the x-rays showed that Spritzer’s enlarged heart was really big and was already pushing his trachea,” Tyler said.  “He would stand up and then he would fall over because he would black out.  Two weeks earlier, he was chasing squirrels.  He went from that to falling over.  It killed me.”e H

It had become increasingly clear that Spritzer was nearing the end of his life.  “I watched for a couple of weeks and I just couldn’t take it. Finally, my two sons came over and got me and Spritzer and took us to the vet.  Spritzer was staring into my eyes and I was bawling, man!”

It was about a month after the dog had begun taking the medications that he was put down.

Tyler had a good job as a successful real estate agent but he plunged into homelessness after a real estate deal went sour during the Great Recession of 2007-08 that was caused by subprime mortgages and a housing bubble.  He had two young sons, now both financially successful at ages 24 and 22.  The family was helped by the Illumination Foundation, an Orange County nonprofit that provides aid to those without shelter.   And they lived for a time in a “big storage unit” that Tyler made into a temporary home.

“The homeless thing is like a black hole, Tyler said.  “You’re almost climbing out and then the thread breaks and you go all the way back down to the bottom.  I had a resume as long as my arm but nobody would hire me.  I raised my two boys by myself.”

Tyler lived in his car for a time and later was able to buy a recreational vehicle, that is still his home.  He also went back to school and earned a graphic arts degree.  He believes that triggered his recovery from homelessness. While in school, he did a graphic picture of Spritzer on his computer.

In 2009, he started repairing auto windshields.  The small business “was just keeping me alive for a while” but now is doing well.  “It’s been pretty good these last six months,” he said. “I get a lot of calls for window replacement, which I don’t do, but I’m thinking about expanding my business to include that.  I could go do a workshop or hire somebody who knows how to do it.”

Tyler said that he didn’t want to get another dog after Spritzer died.  “But now we’ve got Peanut, a small white Chihuahua.  “He’s a menace, 24/7. He’s about the same size and almost looks like Spritzer.”

He also is setting up a nonprofit he is calling Life Rebuilders to help the homeless by giving them shoes.