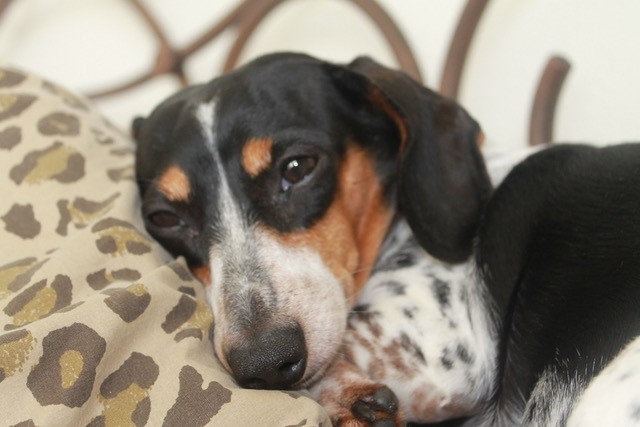 n 2004, Galina Coleman slipped and fell at work not far from where she lived in Petaluma.  She had five surgeries for the injuries she suffered.  In the wake of that personal catastrophy and disillusioned with her marriage, she got a divorced and moved to Southern California.

Today, estranged from her former husband and two sons, she lives in Aliso Viejo and struggles to pay her bills. She was declared totally disabled in 2006 and lives on a Social Security disability check.

“I’m just really struggling,” she said.  “I’m in affordable housing.  My rent is $1,398 a month, which is ‘very affordable’ here. However, for me it’s just really, really difficult.  I’ve tried to get jobs but it just hasn’t worked out for me.  I have two senior dogs and a senior cat and I know they’re basically at the end of their lives.”

Late last November, her struggles came into clear perspective when Abby, her nearly 14-year-old Dachshund, appeared to be having a digestive issue.  “When I took her to a veterinarian, the doctor discovered a heart murmur. She thought it was pretty serious and prescribed medication for Abby after doing an x-ray,” Galina said.

Later, she took the dog to Dr. Lynn Sanchez, a veterinarian she said she likes and trusts at Garden Grove Dog and Cat Hospital.  Dr. Sanchez recommended an electrocardiogram to get a clearer idea what Abby’s problem was.  But Galina could not handle the cost.  She applied for an Angel Fund grant and was awarded $451, a sum that was matched by the hospital.

Abby got the electrocardiogram in late December – and with it some good news: the murmur was not as bad as originally suspected.  “Dr. Sanchez said that everything looked pretty good and prescribed three medications,” Galina said.  A week later, when she took Abby back for a recheck, two of the medications were discontinued.  “One of them was really hard on her kidneys,” she said, “so I was really glad to get rid of it.”

After another recheck early in January, the dog is continuing to take Vetmedin.  “She’s not in heart failure but has some damage to a mitral valve,” Galina said.

When Galina divorced, she took her animals with her.  “I have tried to help them on a piecemeal basis,” she said. “I’ve had to rely on charity.  They’ve all been in pretty good health but now they are at the point where that’s starting to change [because of their ages].”

Augie, Abby’s brother, is two years younger at 12.  Aurora, her cat, also is 12.  Galina believes that Augie will need a dental treatment soon.

“I’ve been given the blessing of having these animals – they are just truly a blessing for me.  I am their steward and I need to make sure they get whatever is needed to take care of them. I have to do that.

“Had I not been able to do this [echocardiogram], I would either have been giving Abby way too much medication or no medication at all.  It wouldn’t have been good either way.  it was going to be detrimental to her health one way or the other.”

Galina is grateful to Angel Fund.  “They really helped me out,” she said.  “It is a wonderful thing to help people because things can be so expensive.  I think it’s a really great thing for veterinarians to give back.  I admire them for doing that.  I think that’s what we’re all here for – to give back.”

She is thinking about moving with her animals to a place – perhaps New Mexico – where her disability check would go further.  She is 58 years old.

“I have ignored a lot of my life for these dogs.  But, in return, they’ve provided me with something,” she said.  That something is love and support.