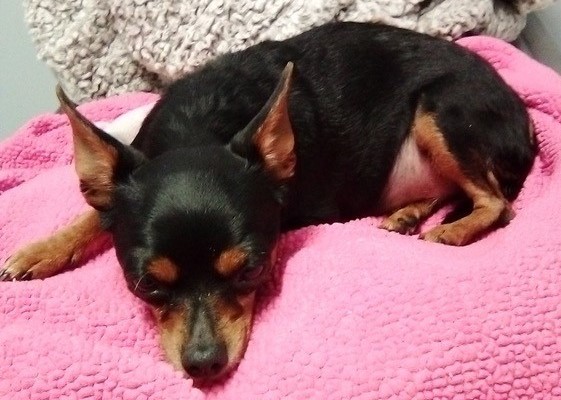 Tim Genoway, who had not worked in four years, was concerned about his dog, Miss Kallie, earlier this year.

“I went to two or three veterinarians’ offices and I could see she wasn’t getting any better,” he said.  Then I went to a practice in Orange.  I was practically out of money and they wouldn’t start treating her condition without any kind of money.

“I was like, my dog’s dying here.  I know she is.  and they would say, ‘Yeah, I know she is. This is serious but we’ve got to have some kind of deposit.’

“I was at my wit’s end. I didn’t know what to do.  I made a sign that said I needed help with vet care.  somebody came along and mentioned one or two organizations and I called them.  They didn’t call me back.  One called me back a couple of days later and said they would be willing to help with $200 to $400.  So that was a good start.”

Then he took Kallie to Anaheim Hills Animal Hospital.  The doctors there examined the dog – a small animal who is part miniature Pinscher and part Chihuahua and weighs about six and a half pounds.  “They thought they knew what the problem was [Pyometra],” Tim said, but they were concerned about whether Kallie could be ready to face the needed surgery.

It was late in the day and the veterinarian told Tim that the hospital closed in 20 minutes and suggested that he and Miss Kallie say goodbye to each other.  Fearing the worst, Tim was thinking: “This is my best friend. I can’t let her go like this. She’s my partner in life. There’s got to be something they can do.  Please, let’s not give up!”

The doctor told him: “We’ll give it 24 hours and, if she recovers, we’ll go ahead with the surgery.  But we can’t promise anything.”  The dog was put on an IV about 11 p.m.

The next morning, Tim got a call from the hospital.  The message was positive and he was ecstatic. “She was doing really good and they said they expected to do the surgery sometime that day, if not the next day.  And they said she would likely make it! They said they would check her throughout the day and when they thought she was ready, they would go ahead with the surgery.”

The surgery was performed about 3 p.m. that day.  “They spayed her and cleaned out all the bad stuff, stitched her up and did a beautiful job. I couldn’t have asked for more.”

The hospital steered him to Angel Fund, which approved his application and granted him $500, an amount matched by the practice.

Kallie, he said, weighed barely six pounds when she had the surgery and weighs about have a pound more now.  Tim said that she was ready to play the day he brought her home from the hospital.

“She’s definitely a very special dog,” he said.  “There’s something about her.  I lost my Pitbull in April last year.  If she had left this year, that would have been both of my best friends gone.  Basically, Kallie’s the only family I’ve got left.  I’ve got some cousins but don’t really talk to them too much.”

He is estranged from his sister and has not spoken to his mother in more than two years.

“You guys [Angel Fund] are angels.  You really, truly are.  You are awesome.”

When it was time to pay his bill at Anaheim Hills Hospital, Tim said, “I took all the money I could put together.  But they said, you just need to sign.  It’s all taken care of.  Talk about the Lord blessing me!”

He said that he once had a good job and owned a house, then fell on hard times and had not worked for several years. He recently started a job as a security officer at a shopping center in Orange – and what he hopes will be a fresh start in life with a healthy and happy best friend.